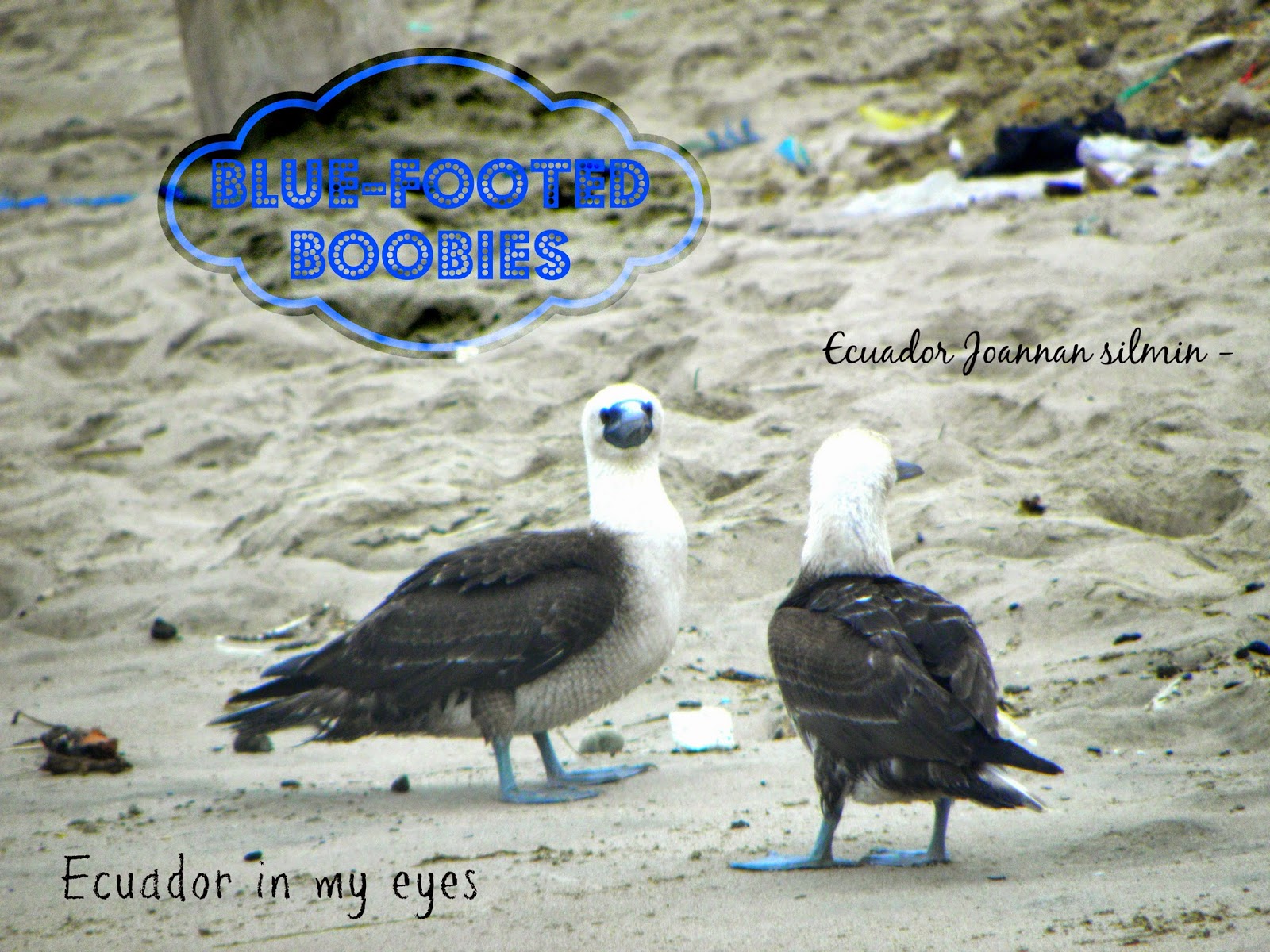 Blue-footed Boobies are usually considered as part of the magic of Galapagos Islands.

But these magnificent marine birds may be found in several locations on the Eastern Pacific coastline.

Usually they nest on small islands with rocky coastlines.

But with the El Niño closing on, it has been possible to find more and more of them in the continent’s coastline.

These pictures are taken in a small fishing village of San Pedro in Santa Elena Province of Ecuador. 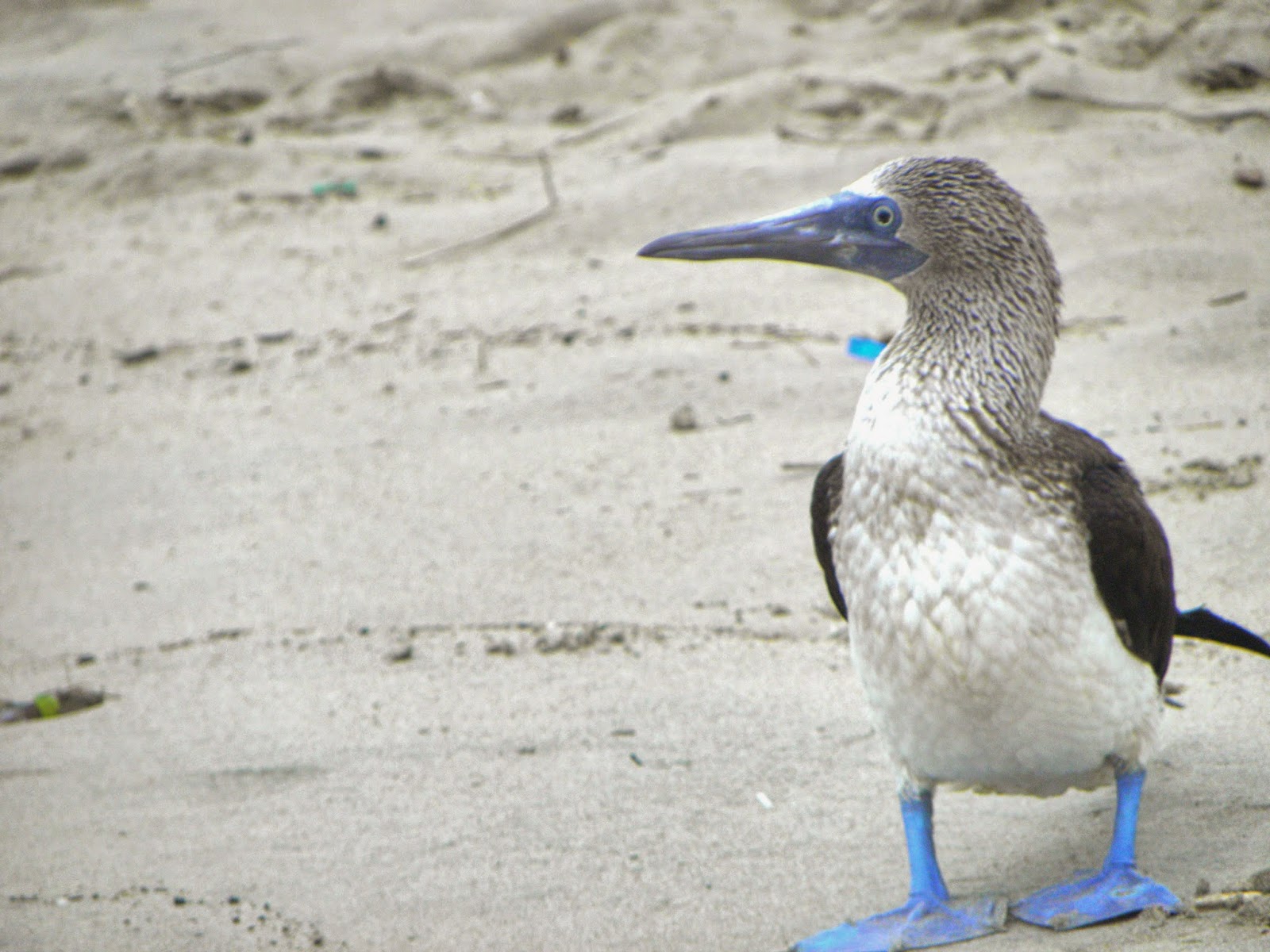 While my son was bathing and having fun with his friends I decided to take a walk and take some pictures of the sea, the birds and the fishers.

It was a slightly clouded day with a lot of wind and the local people wore warm clothes while the tourists, like me, pranced around in t-shirts and shorts.

It started getting cold but I wanted to go a bit further, right next to the fishing boats, to see if there was something worth taking pictures.

And right there on the beach, hiding behind a fishing boat was a flock of Blue-Footed Boobies. 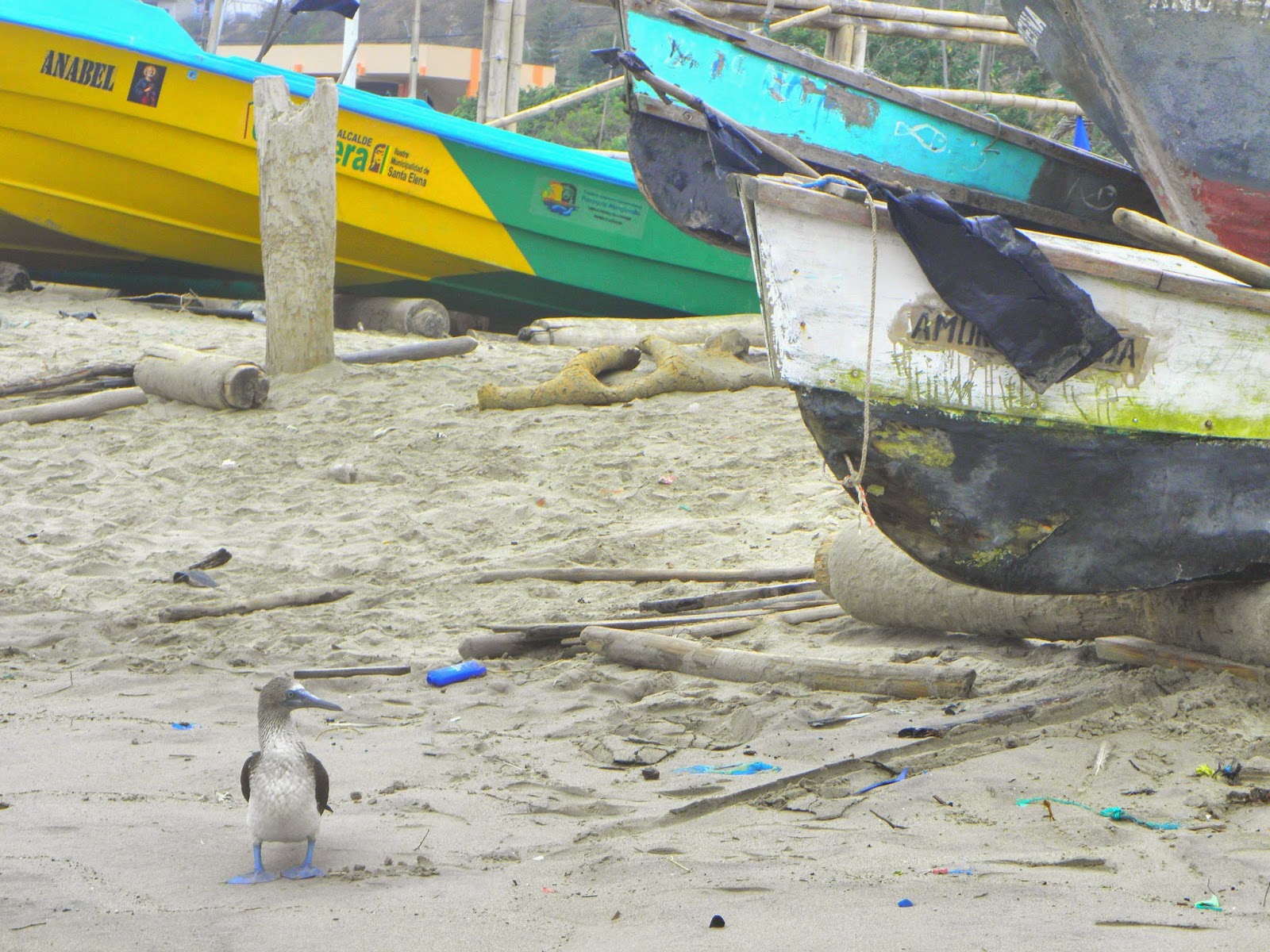 The origin of the English name “Booby” is thought to originate from “Bobo”, which in Spanish means a clown.

The name was given for the birds for their comical and somewhat ungainly behaviour when on land.

They were also thought of as foolish due to their fearlessness of humans.

I was able to see an example of this fearlessness right there.

One of the Boobies stood right next to a fisher and showed no fear or worry. 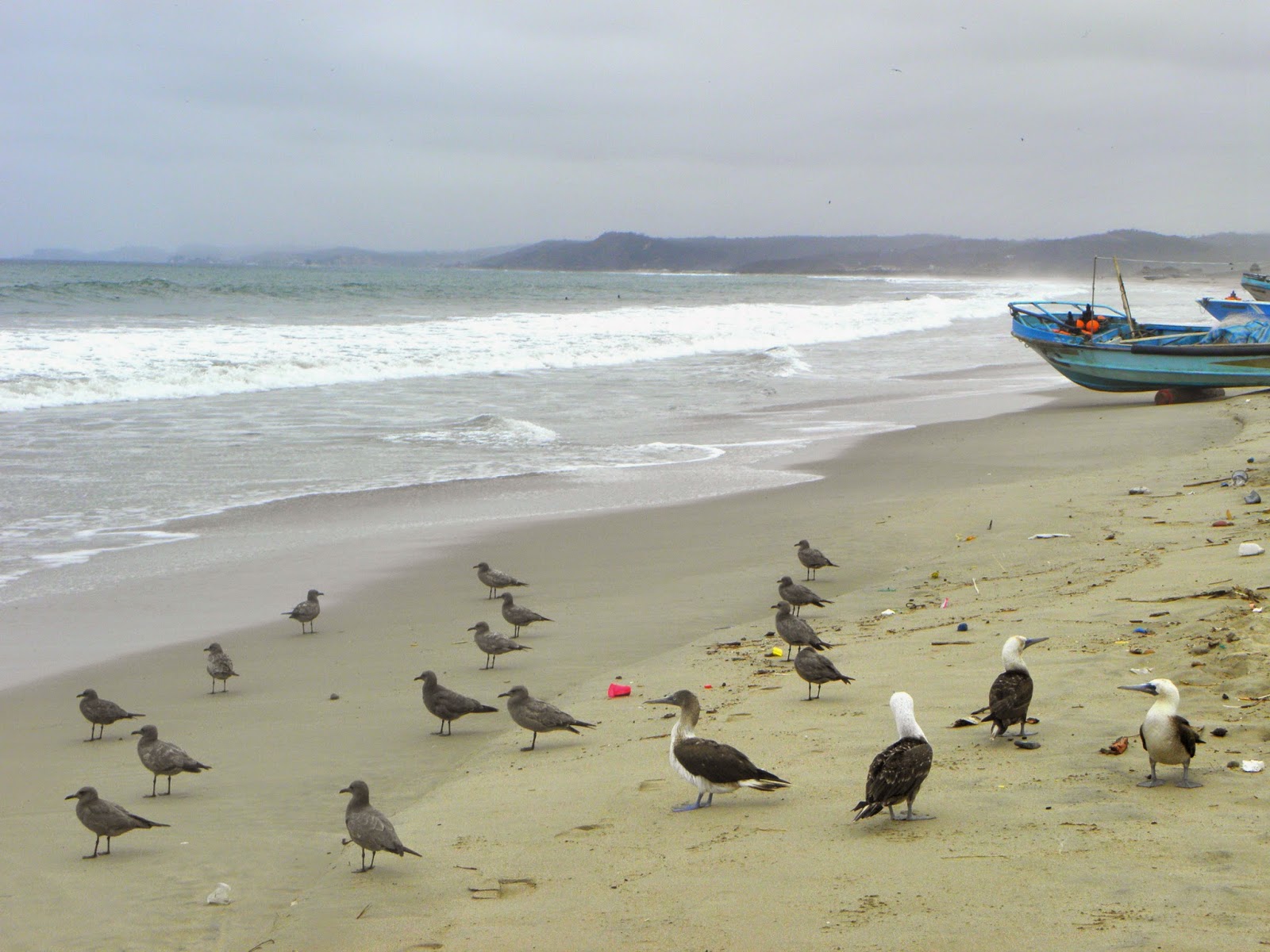 I had to finally ask if it was a pet.

He told me that it was a wild bird, just like the other ones.

But they would come to see if the fishers had any small birds or other food to give to them.

- It is a calm and friendly one, he told me, if you don’t go too near.

Blue-Footed Boobies are large birds and they reach 70-90 cm in height and can have a wing span of up to 1,5 meters. 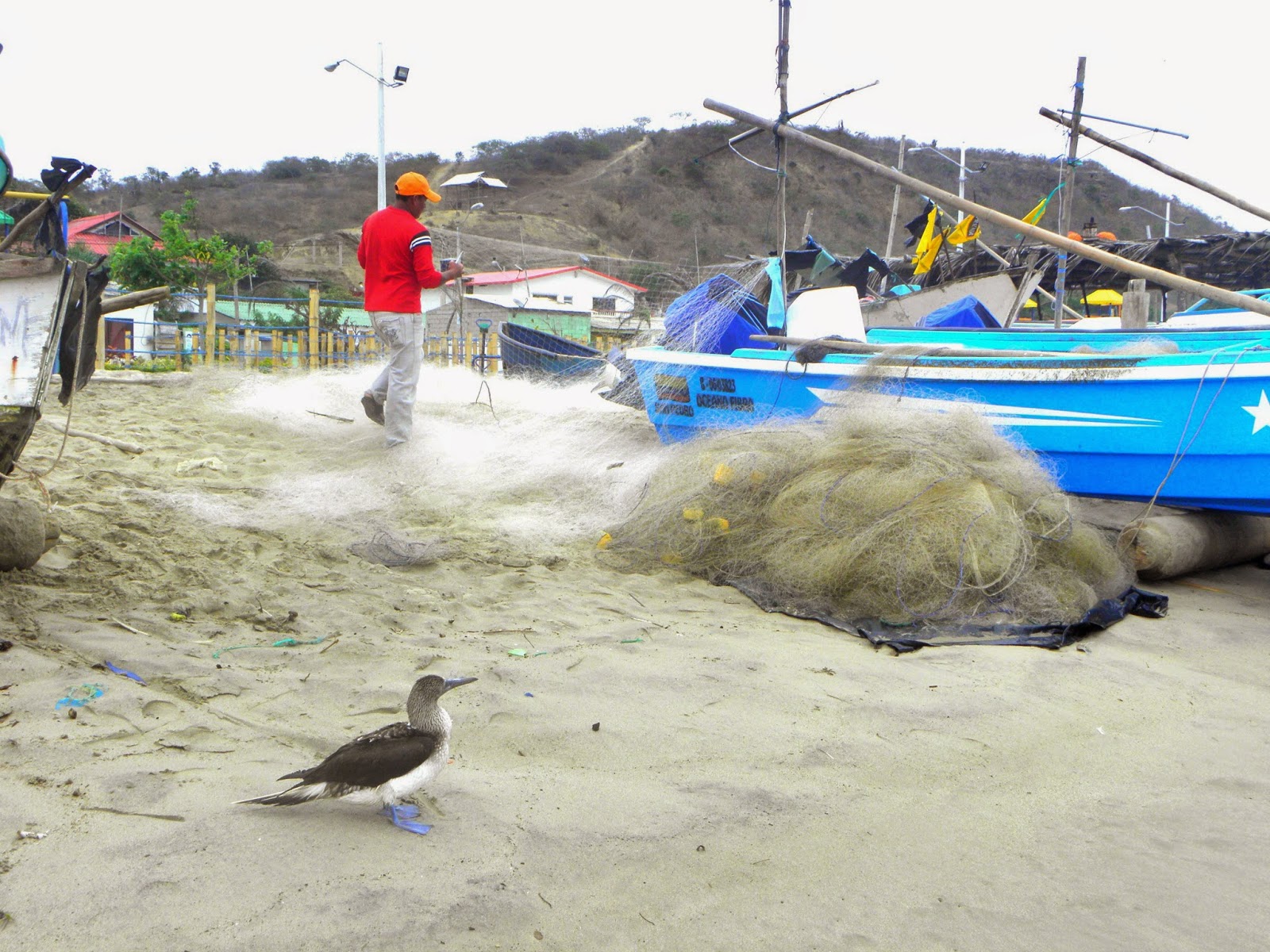 I couldn’t help getting a bit closer all the time, just to take one more picture.

The birds stared at me, until finally they got bored and continued their stare at the sea.

Mystery surrounds the reason for the blue feet but it plays an important part in courting.

It seems that the colour of male’s feet may be linked to their diet and indicate their condition. 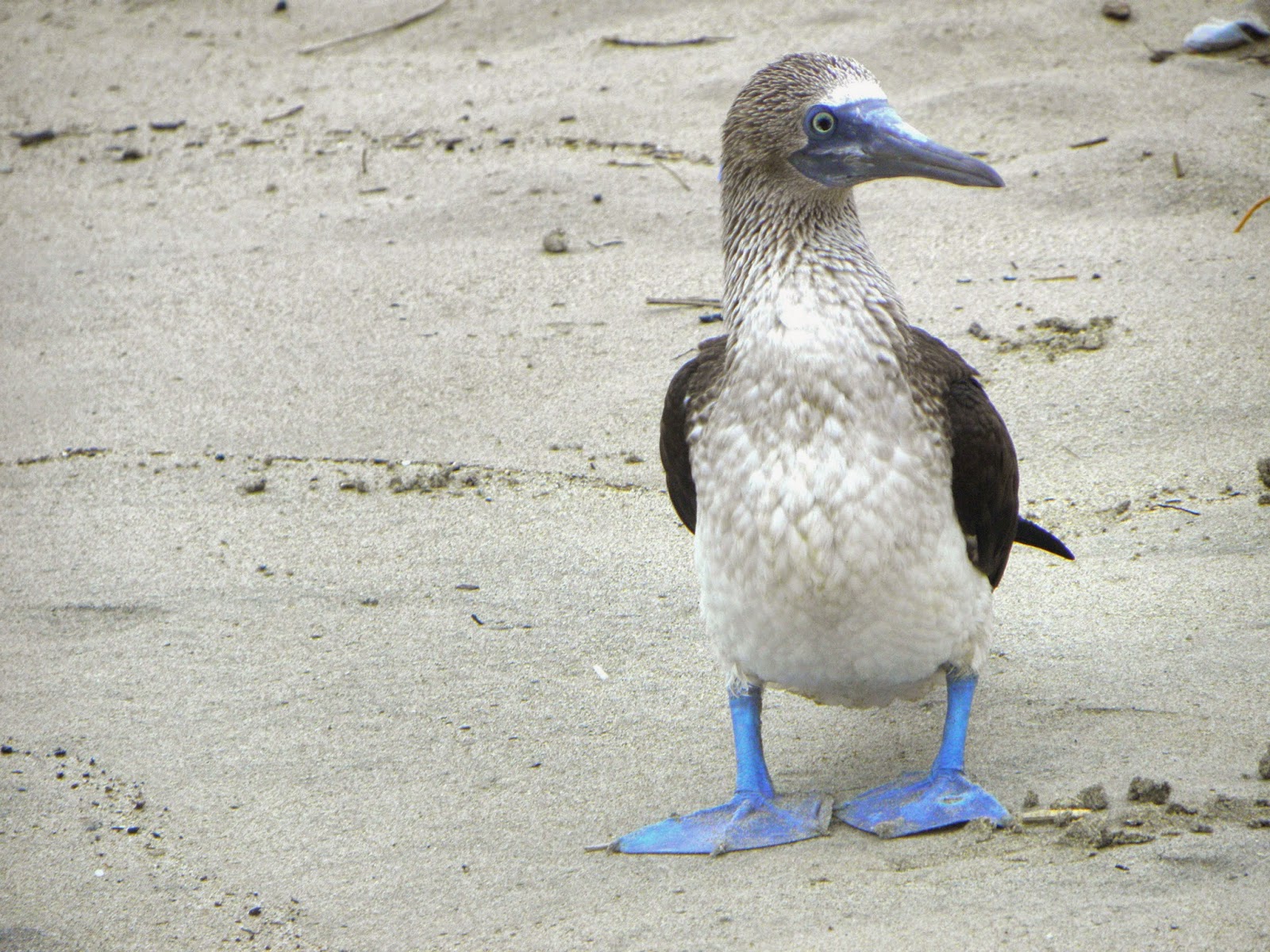 Females are likely to select for mates birds with brighter feet.

Boobies are strictly carnivorous marine birds and all feeding is done at sea.

El Niño makes the water warmer and many of the fish that usually live in the Ecuador’s coast aren’t present.

The Humboldt Current brings usually cold water and food for the sea life from the Antarctic till the southernmost part of continental Ecuador. 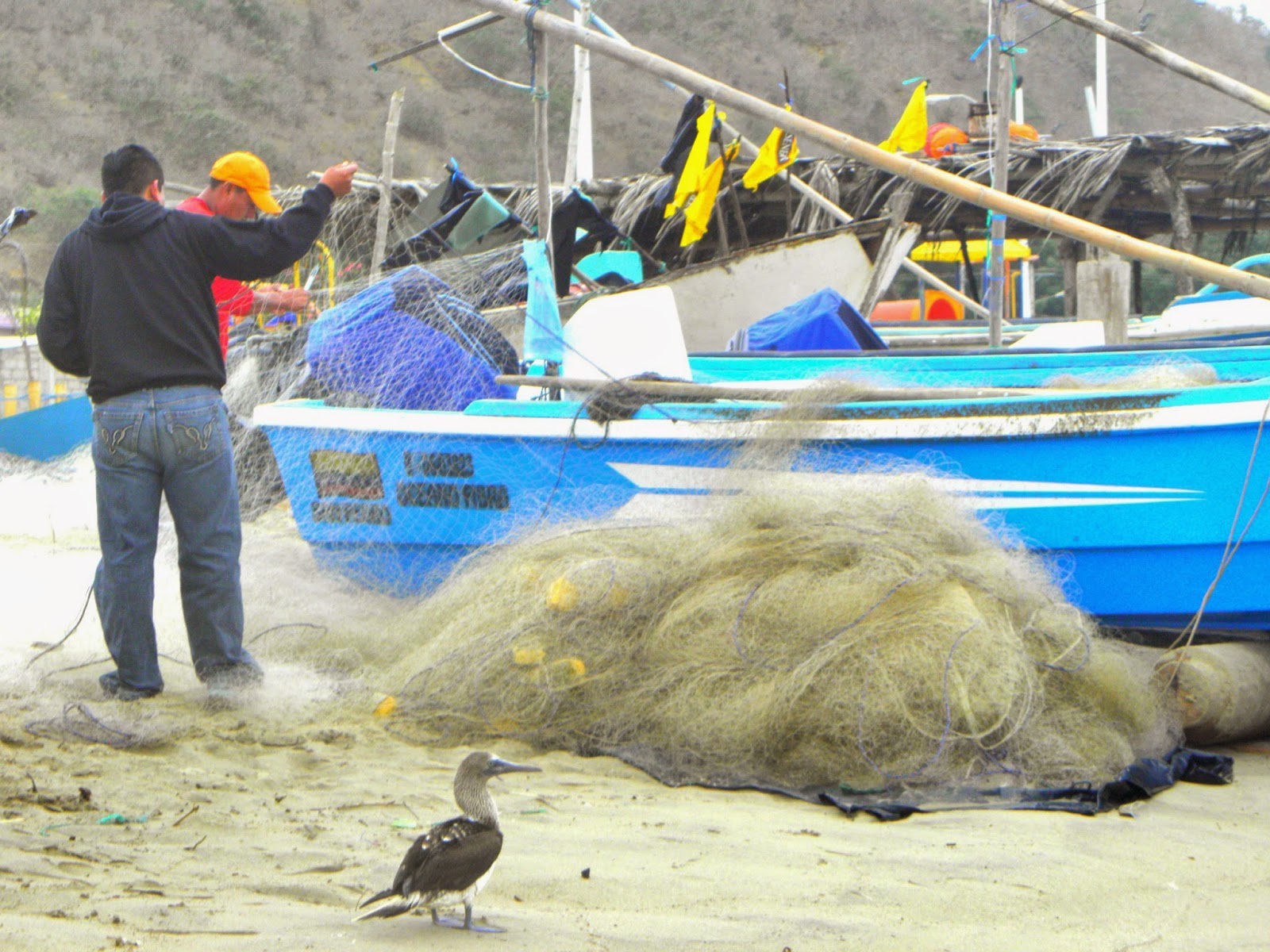 From there the current turns towards Galapagos.

The rich cold water is one of the reasons why there are so many species of animals and birds on the islands.

With the warm waters of El Niño it is nice for the tourists to go for a swim but both animals and fishers are suffering from the lack of fish.


The Boobies were definitely waiting for a change for better. 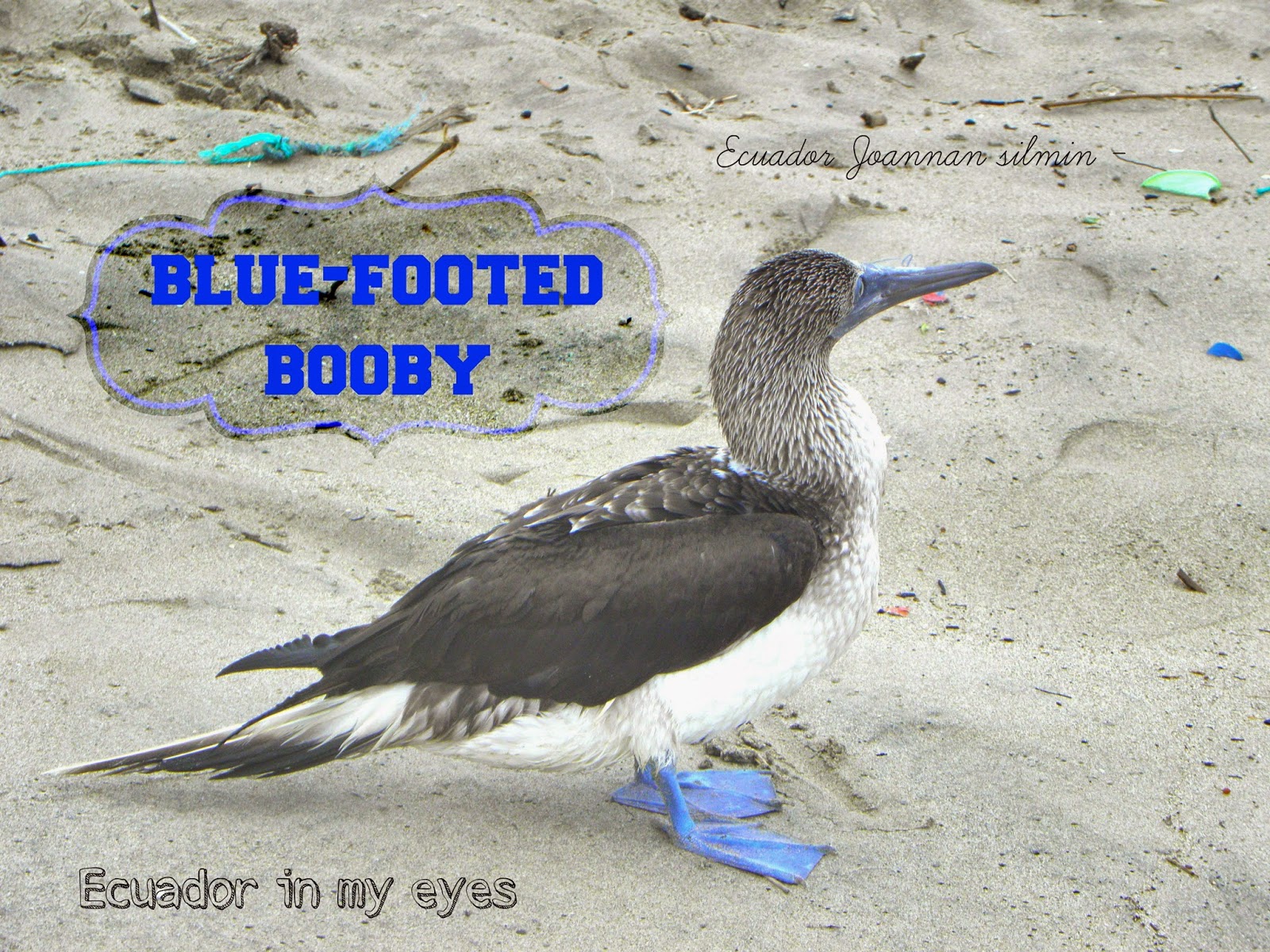