One of the reasons I love living in Ecuador are the volcanoes.

The volcanoes in Ecuador belong to the Northern Volcanic Zone of the Andes and occur on four chains.

South of Quito, the capital of Ecuador where I lived for years, two parallel chains of the Andes that cross Ecuador from north to south rise to their most dramatic peaks.

During his visits to South America in 1802, the German explorer Alexander von Humboldt called this section of the Ecuadorian Sierra “The Avenue of the Volcanoes”.

Eight of Ecuador’s ten highest summits are found in this part of the country.

Here are my five favorite volcanoes in Ecuador. 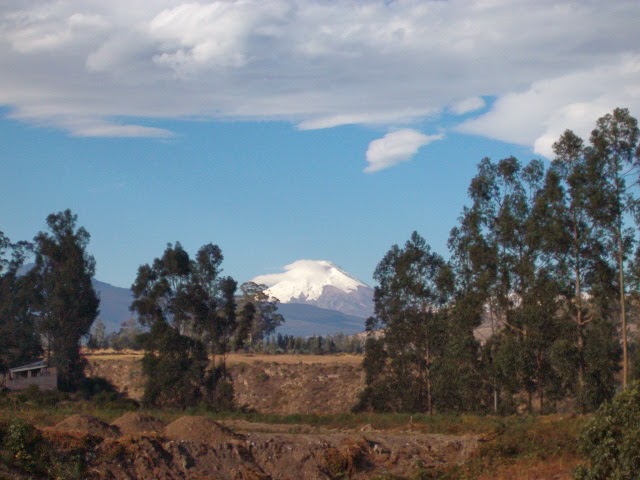 Nevado (snowcap) Cayambe is a massive volcanic complex in northern Ecuador, 60 km North-East of the city of Quito and only 15 km East of the 20,000 inhabitants city of Cayambe.

The equator passes through its southern flank, the volcano and most of its slopes are within the Cayambe Coca Ecological Reserve.

The name Cayambe is supposed to derive either from the indigenous language Caranqui’s word “kayan” or “ice” or from the Kichwa word “kahan” meaning “high cold place”.

The andesitic-dacitic volcano is located on the isolated western edge of the Cordillera Real in the Ecuadorian Andes, east of the Inter-Andean Valley. 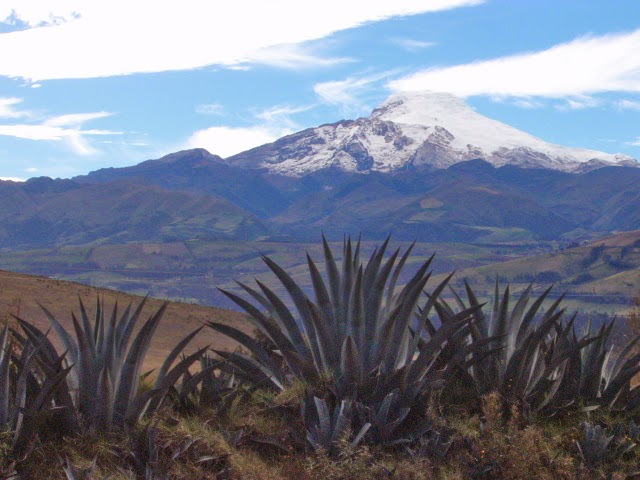 The volcano is capped by extensive glaciers, which descend to 4200 m on the eastern Amazonian side.

It contains 2 summit lava domes located about 1.5 km apart, the western of which is the highest.

Several other lava domes are located on the upper flanks and have been the source of pyroclastic flows down the lower flanks of the volcano.

La Virgen is a prominent young cinder cone on the lower eastern flank, which erupted thick andesitic lava flows that reached 10 km to the east.

There is only one confirmed historic eruption, during 1785-86, but recent studies have shown that the volcano has produced frequent explosive eruptions during the past 4000 years.

Cayambe is very popular among mountain climbers and although it’s not technically really difficult, it is rather dangerous due to very active glaciers, crevasses and avalanches. 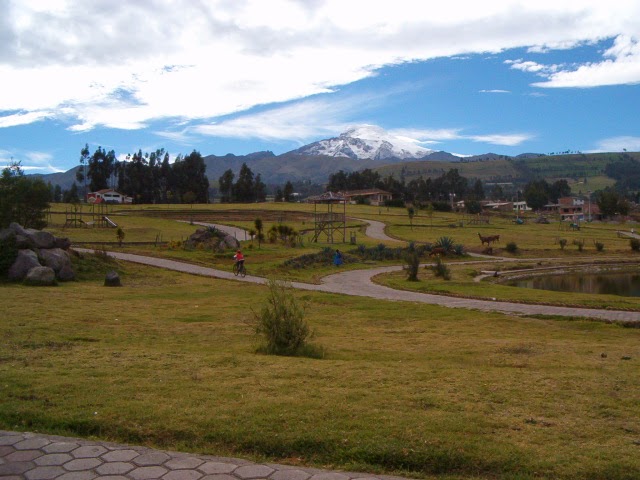 Snowstorms and high winds are also more frequent on Cayambe than on many other peaks in Ecuador.

Nevado Cayambe lies within the Cayambe Coca Ecological Reserve, a species rich nature preserve with a wide range of plant communities and habitats that include grasslands, cloud forest, subalpine forests, and glaciers.

Over 100 endemic plant species are found here and the area has 395 species of birds, including the huge Andean condor which soars high above the region.

There are also 106 mammal species, including mountain tapir, cougar, agoutis, armadillos, and spectacled bears, you can also find 70 different species of reptiles and 116 species of amphibians there.

The reason why Cayambe is one of my favorite volcanoes is that it is the first snowcap I used to be able to see from my home when I lived in Ibarra. 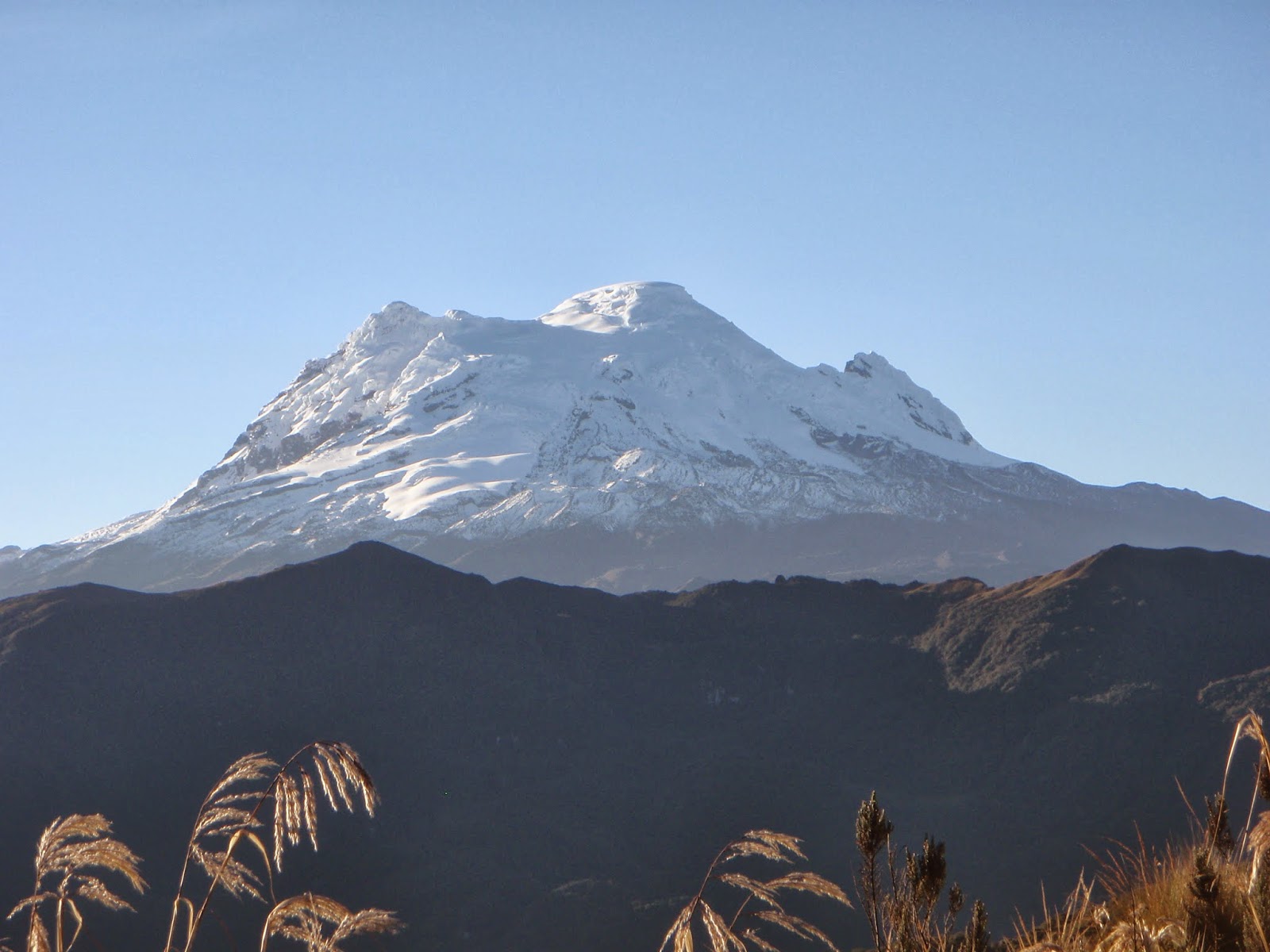 The Antisana volcano rises to a height of 5 758 meters above sea level.

It is located on the eastern margin of the Cordillera Real, at the latitude where the volcanic chain of the Northern Volcanic Zone is widest.

Antisana is the 4th highest volcano in the fascinating wild region of Ecuador and it is in fact one of the largest stratovolcanos of the northern Andes.

The Antisana complex contains 2 generations of volcanic edifices, an older volcano cut by calderas and eroded by glaciers and a young cone.
The only confirmed historical eruption was from 1801 to 1802, when a lava flow was erupted from a vent North by North East of the summit.

The mountain has a reputation for being a hard climb, but it is likely that the striking views make it even more rewarding to hard-core climbing enthusiasts.

Antisana is completely covered with snow and glaciers which makes it one of the most daring climbing expeditions in the world which is the primary reason why Antisana remains a pretty rarely explored and climbed peak and not many climbers have climbed it yet.

The volcano is surrounded by striking lagoons that tend to reflect the Antisana Peak in their clear and undisturbed waters – a most memorable sight, one also gets to see wolves, wild horses, condors and llamas all along the Antisana expedition. 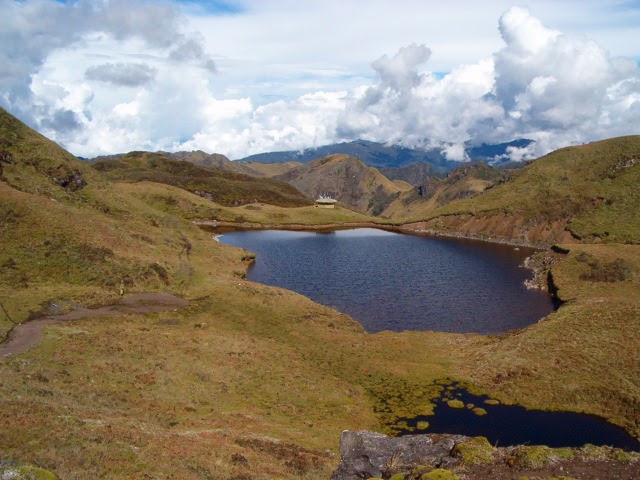 In the native language, Antisana means 'dark mountain', also an interesting fact is that the Inca’s called Amazon Antisuyu, and the Amazon area in Ecuador is still known as Antisuyu in Kichwa.

Antisana volcano is inside the Condor Bioreserve as part of the Antisana Ecological Reserve which comprises and area of 296,000 acres.

The reserve was created in 1993 and it is wedged between the Cayambe-Coca Ecological Reserve and the Sumaco Napo Galeras National Park, together the three areas possess immense natural wealth.

The Spanish expedition who discover the Amazon river, started their expedition crossing the Andes to Amazon rainforest beside the Antisana Volcano 400 years ago.

Imagine crossing the cold paramo (highlands) and then continuing into the Amazon rainforest on horseback. 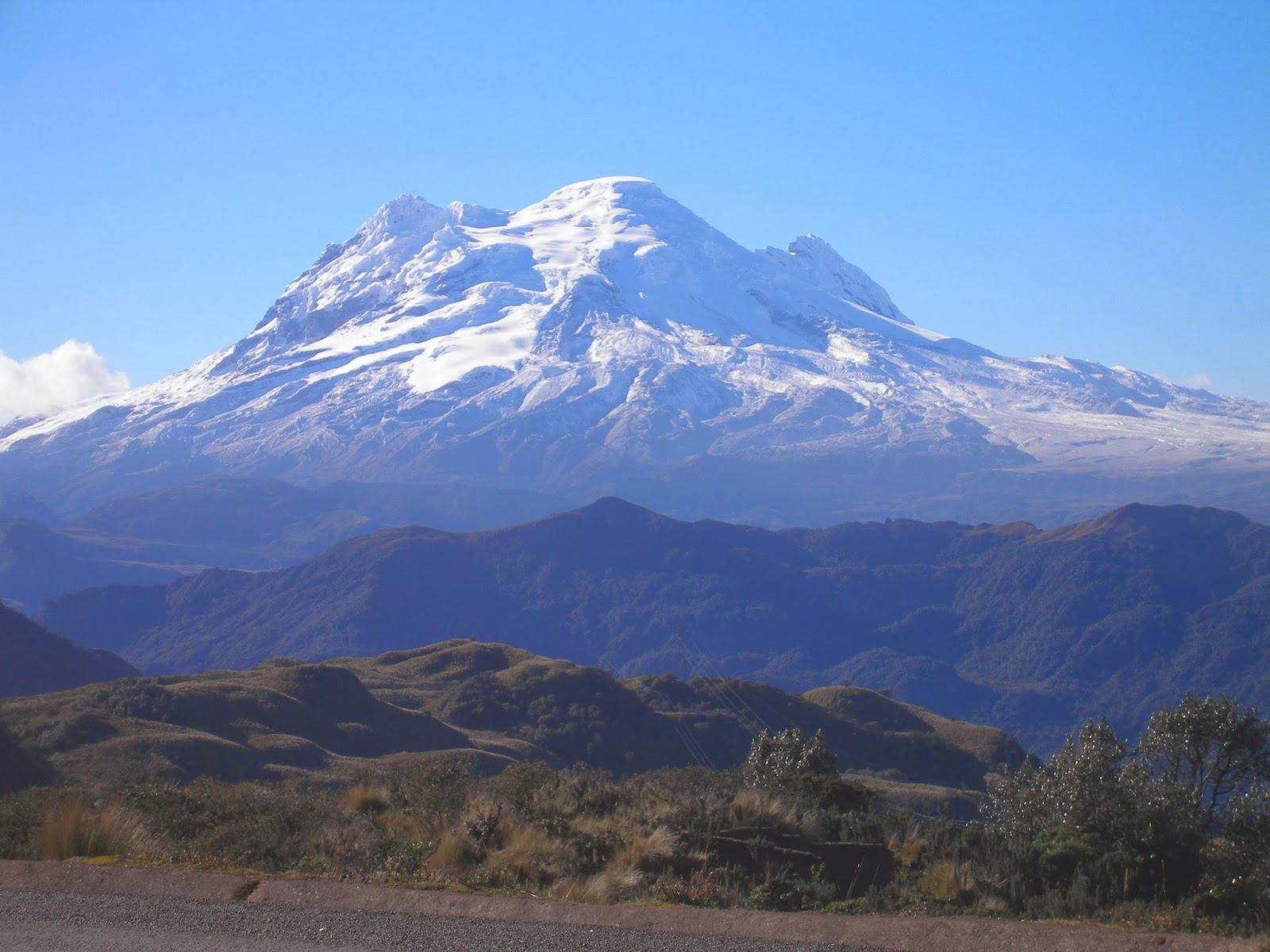 The Guacamayos mountain range it's considered one of the most important zones of biodiversity of the reserve.

The Antisana Ecological Reserve is located in a "hot spots" (high biodiversity concentration) considered for Ecuador by the WWF.

The Papallacta hot springs and its lagoon are some of the main tourist attractions of the area.

Antisana is one of my favorite volcanoes because I used to drive by it at least twice a week before to get to work and then back home to Quito.

It stays under cloud cover the most of the year but when there would be no clouds it was impossible to drive by without stopping and taking pictures of its magnificent beauty. 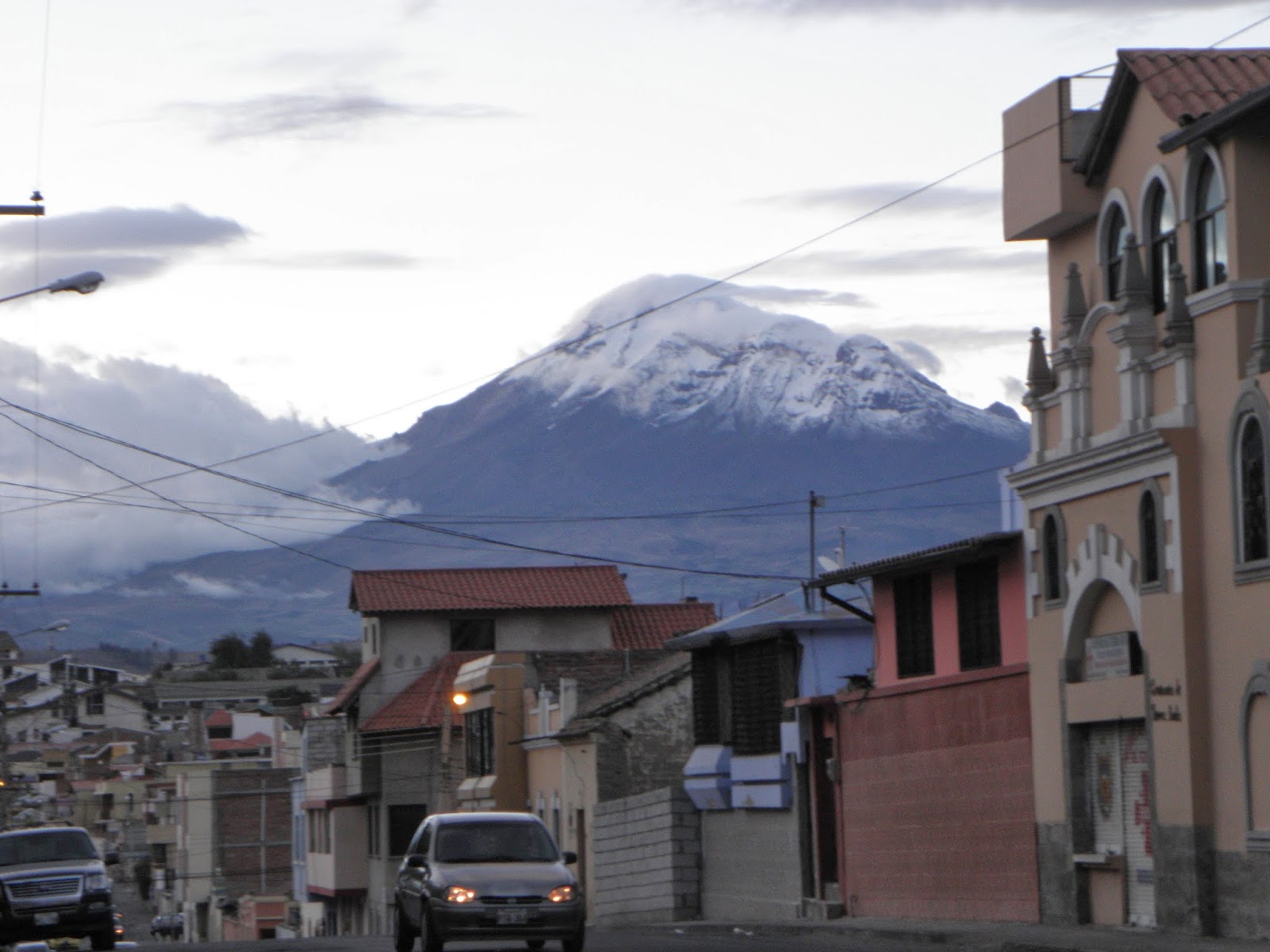 Chimborazo is the highest Ecuadorian peak (20.702 ft) and it is the third highest in America.

The summit of Chimborazo is also the furthest point from the center of the Earth, as it is crossed by the Equatorial line, where the Earth is wider.

Chimborazo is a currently inactive stratovolcano and its last known eruption is believed to have occurred around 550 AD.

Chimborazo is the “Colossus” of the mountains of the region, but on a clear day, other impressive snowcapped mountains can be admired like the Altar and Carihuaraizo.

Under clear conditions the summit of Chimborazo can be seen from the coastal city of Guayaquil, nearly 140 km away.

The top of Chimborazo is completely covered by glaciers, with some north-eastern glacier arms flowing down to 4,600 m. 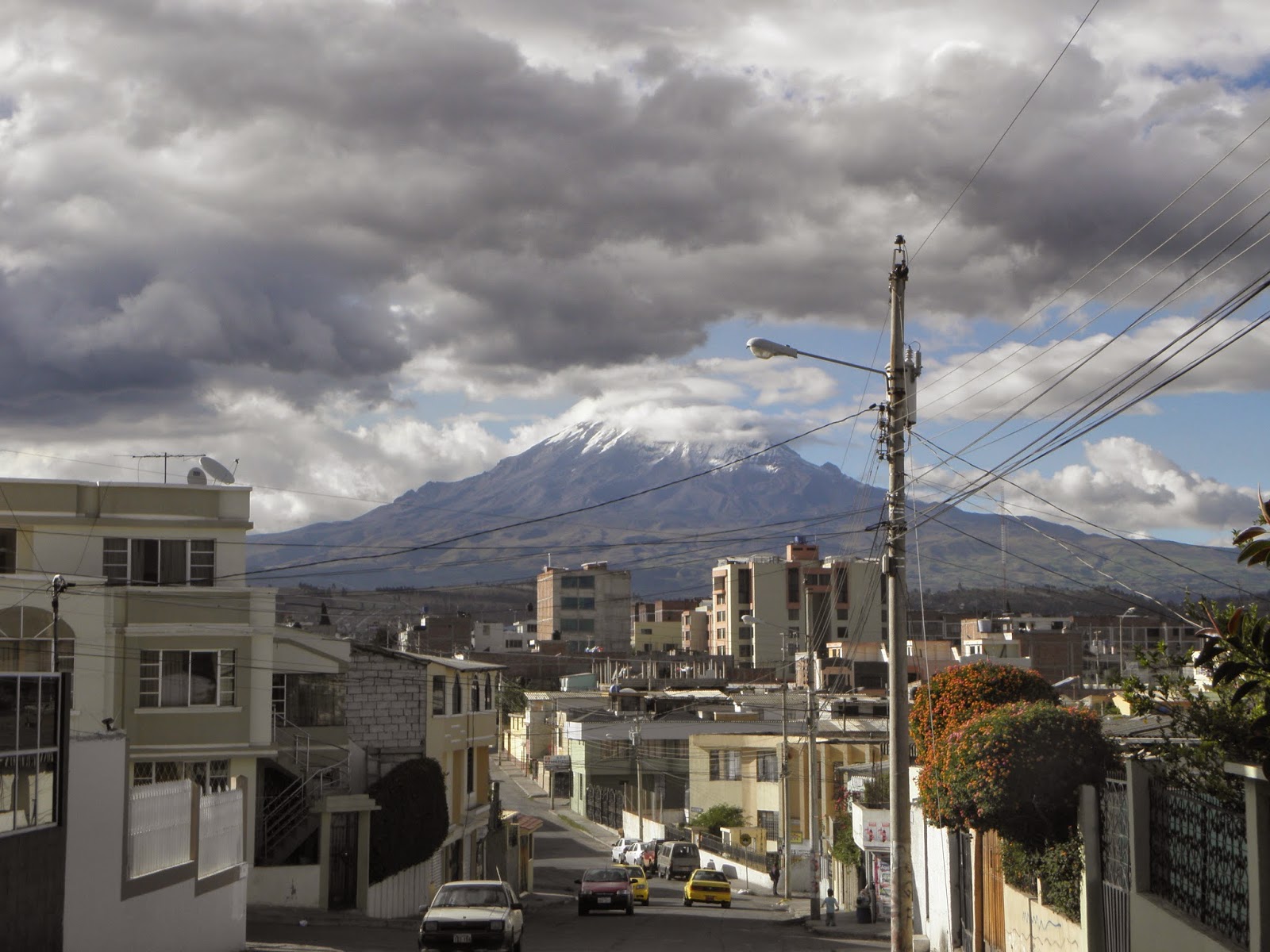 Its glacier is the source of water for the populations of the Bolivar and Chimborazo provinces of Ecuador.

Chimborazo glacier’s ice mass has decreased over the past decades.

As on other glaciated Ecuadorian mountains, Chimborazo’s glacial ice is mined by locals (the so-called Hieleros from Spanish Hielo for Ice) to be sold in the markets of Guaranda and Riobamba.

In the earlier days, the people transported ice for cooling uses down to coastal towns such as Babahoyo or Vinces.

There exist several theories regarding the origin of the name Chimborazo.

According to another source, “chimbo” is Shuar for “throne of master/god” resulting in “icethrone of god”.

The kichwa speaking locals also used to call the mountain Urkurazu, or “mountain of ice”, “urku” meaning “mountain” in Kichwa.

There are many folk stories about both of the mountains.

The reason why Chimborazo is one of my favorite volcanoes in Ecuador is its immense beauty; it is truly a sight to behold.

One of the Ecuador’s most active volcanos is Mama Tunguragua (16.500 ft) or it could even be called the most active right now.

Tungurahua is also one of South America’s most active volcanoes.

Since 2000, a new lava dome has been growing in its summit crater.

Part of the population around its base has been evacuated.

Historical eruptions have all originated from the summit crater and have been accompanied by strong explosions and sometimes by pyroclastic flows and lava flows that have reached populated areas at the volcano’s base.

The current long term eruption began in 1999 and has caused the temporary evacuation of the city of Baños at the foot of volcano already a few times.
Tungurahua’s name means Throat of Fire, a very appropriate in my opinion and it is also called “The Black Giant” by many.

Night view of the erupting Tungurahua is very popular and many tourism agencies sell trips to watch the volcano erupting or to visit the lava flow.

The idea of visiting an active volcano may not be to everyone’s taste but to others it is a majestic dominant feature of the landscape that is well worth visiting.

Much of the landscape and natural life surrounding the volcano has been influenced by its cycles of activity, and the plume of ash that is released by Tungurahua is visible for long distances in every direction.

As well as exploring the area around the volcano, there are also a wide variety of other adventure sports to try in Baños, including mountain biking, white water rafting and even paragliding.

Because of the volcanic soil in the area and the hot water springs, the town is also particularly known for the wide range of spa treatments that are on offer there.

The reason Tungurahua is my second favorite volcano in Ecuador is that I was able to be on it while it was erupting and also visit the lava flow. 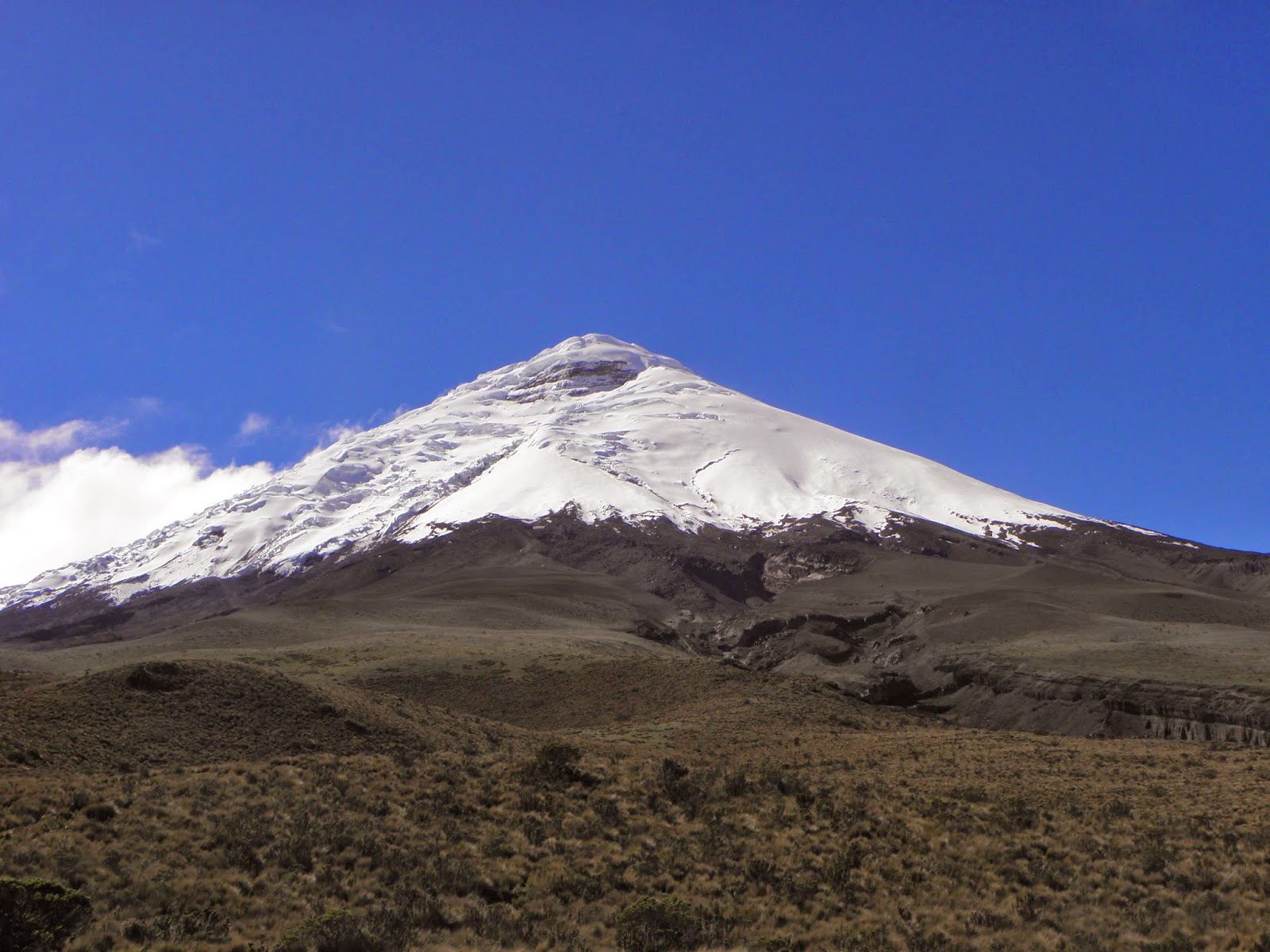 On a clear day, from Quito, you can see the perfectly symmetrical cone shaped Cotopaxi (19.347 ft), the highest active volcano in the world.

This snowcapped volcano and its surroundings make up the Cotopaxi National Park.

The park offers numerous activities for adventurers and nature lovers, all immersed in an imposing geological landscape.

Although many sources claim that Cotopaxi means “Neck of the Moon” in an indigenous language this is unproven.

The mountain was honored as a “Sacred Mountain” by local Andean people, even before the Incan invasion in the 15th century.

Cotopaxi was worshiped as “rain sender” that served as the guarantor of the land’s fertility, and at the same time its summit was revered as a place where gods lived. 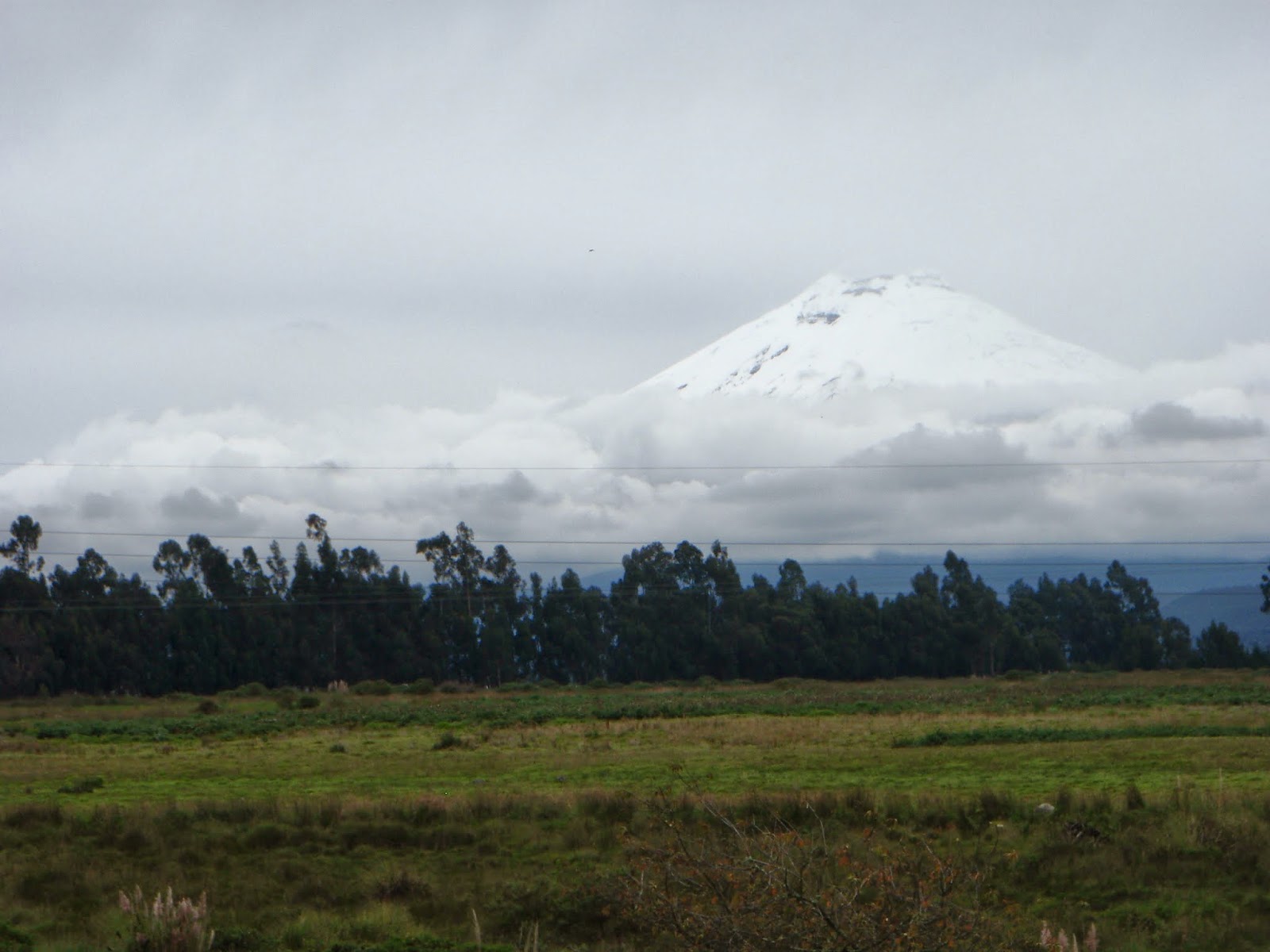 The first European who tried to climb the mountain was Alexander von Humboldt in 1802 but he did not reach the summit.

Although Cotopaxi has had at least ten major eruptions since 1742, it’s been fairly quiet since its last burst of activity in 1904.

Some lahars have travelled more than 100 km and reached the Pacific to the west and the Amazon Basin to the east.
At the moment, it has been dormant for over 70 years, which is an unusually long interval in its recent history.

Other highlights of this National park are the Rumiñahui volcano (15600 ft), and the Limpiopungo and Santo Domingo lagoons.

It is possible to see the reflection of the surrounding volcanoes on both lagoons.

Cotopaxi National Park is also home to white-tailed deer, rabbit, lamas, Andean foxes and pumas, a herd of wild horses and over ninety species of birds.

A rare high altitude hummingbird (Oreotrochilus Chimborazo) has been discovered to live on the slopes of Cotopaxi between 13,000 and 15,000 ft where it nests on protected cliffs.

Cotopaxi is my favorite volcano in Ecuador because of its perfect sugar cone shape and the gorgeous scenery you can find at the National Park.