Ingapirca is a town in Cañar Province, Ecuador, and the name of an Inca archeological site just outside the town.

The town was named after the Inca palace and temple site.

The name is Kichwa for "Inca wall".

The Ingapirca area is a blooming parish of southern Ecuador located in Cañar province.

It sports 240 square kilometers and a population of approximately 14,000 inhabitants, out of whom 2,000 are living in the parish center (3,180 meters or 10,000 feet above sea level), and the other populace is spread all around the countryside. 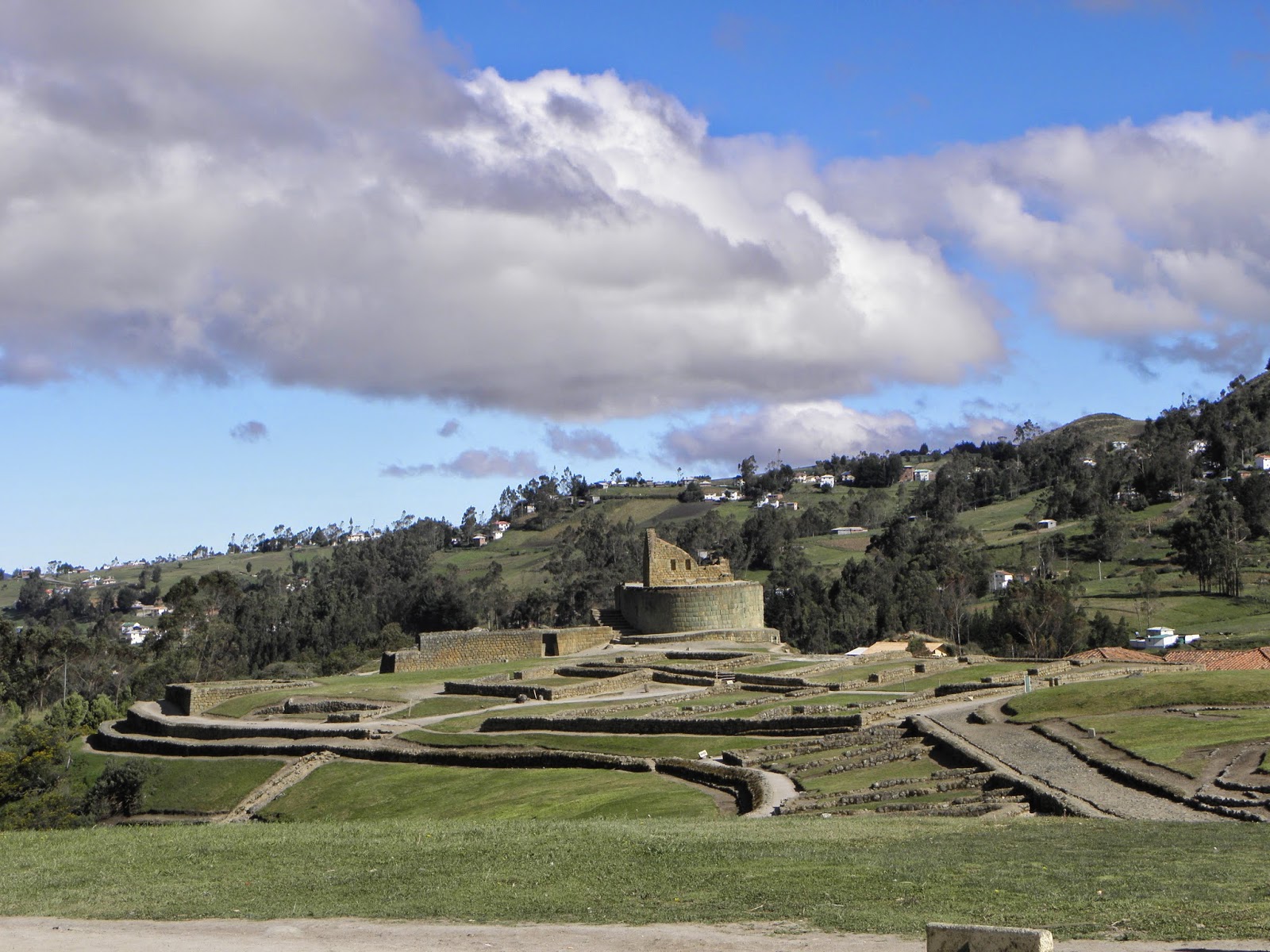 The town's name of Ingapirca was taken after the archeological complex which stands forth as an important evidence of Cañari and Inca presence.

Ingapirca archeological complex is the site of the largest known Inca ruins in Ecuador.

The sight of the Inca empire’s only remaining sun temple standing proudly on a hill at 3,200 meters elevation with panoramic views over the surrounding countryside is highly impressive.

The most significant building is the temple of the sun, an elliptically shaped building constructed around a large rock.

The building is constructed in the Inca way without mortar in most of the complex. 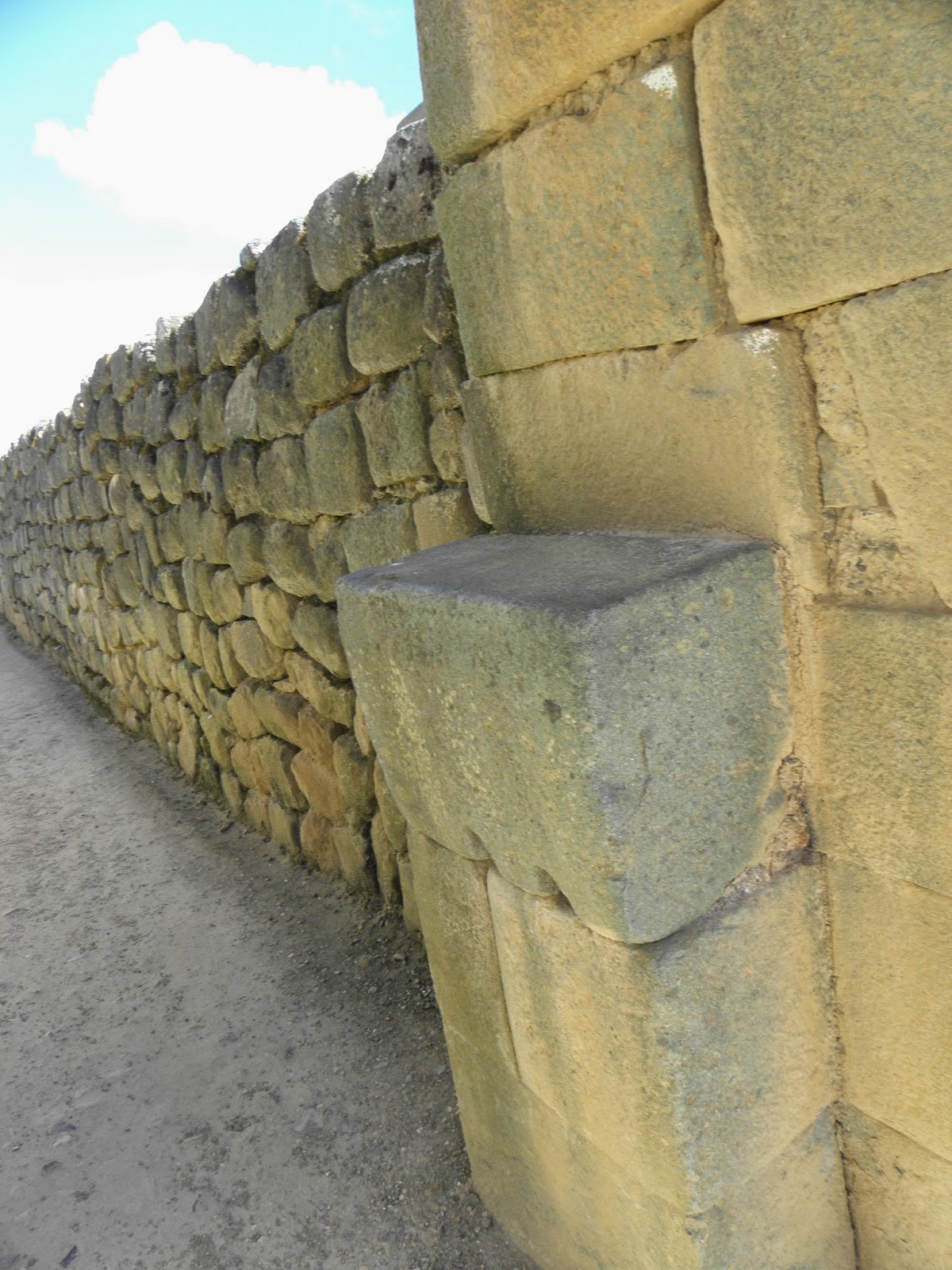 The stones were carefully chiseled and fashioned to fit together perfectly.

The highlight of the complex is the Temple of the Sun, also known as El Castillo (The Castle).

The mind-boggling stonework that is the hallmark of Inca construction can be appreciated in this two-story structure, hand-carved so precisely that mortar was unnecessary.

Steps lead up to a trapezoidal doorway (four-sided, with two parallel sides) and a rectangular platform.

It’s entertaining to stand in the sentry posts of the temple and hear your whispers reverberate around the walls. 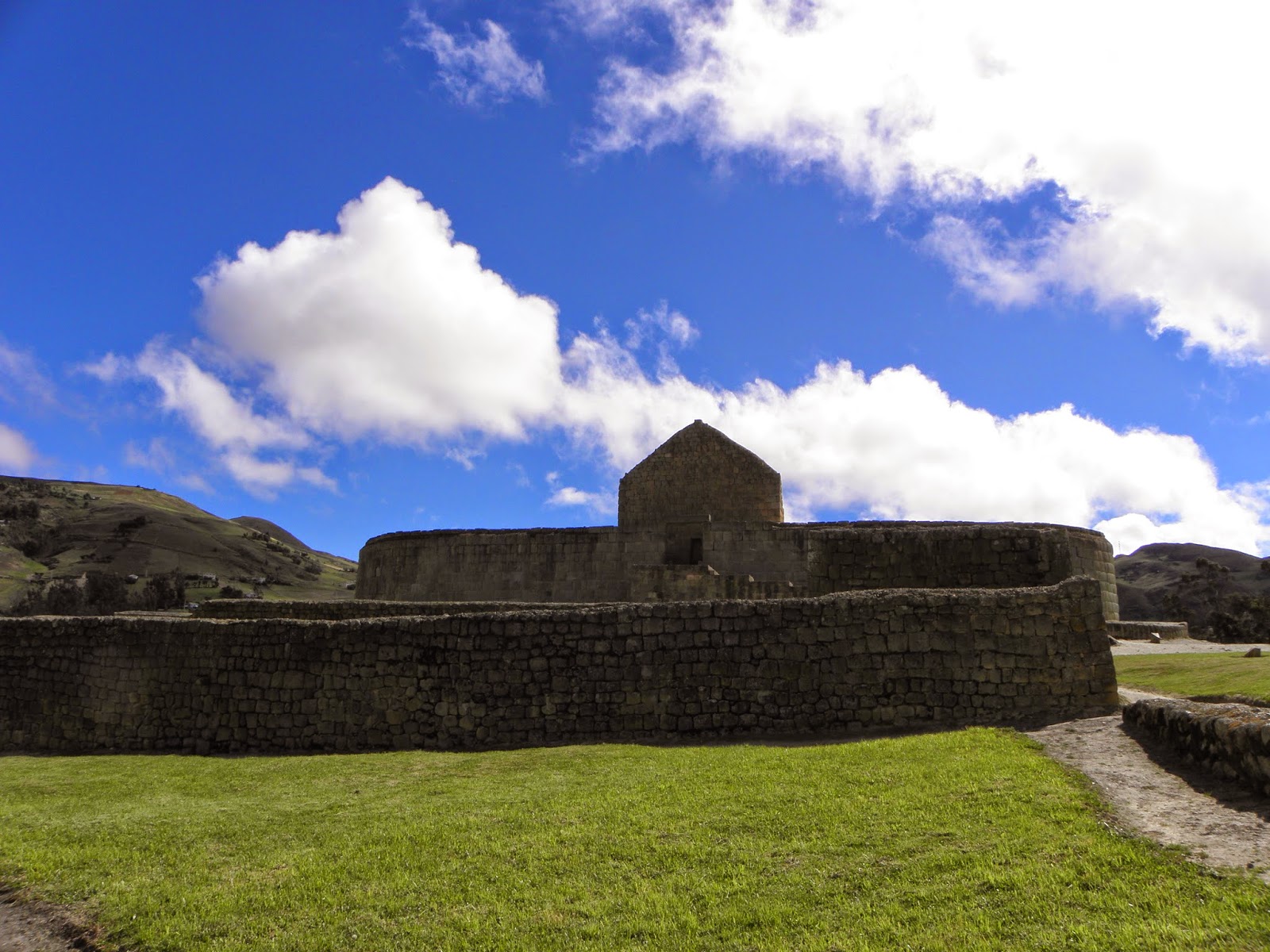 Take a few moments to appreciate the view from here—the temple’s location is as mesmerizing as its construction.

The famous rounded Temple of the Sun is well-preserved, and forms an impressive centerpiece to the complex.

Surrounding it are five hectares of low stone walls and grassy slopes. The small Pilaloma complex on the south side marks the original Cañari settlement, next to a pointy-roofed replica of an Inca house and round depressions called colcas that were used to store food.

The temple of the sun was positioned so that on the solstices, at exactly the right time of day, sunlight would fall through the center of the doorway of the small chamber at the top of the temple. 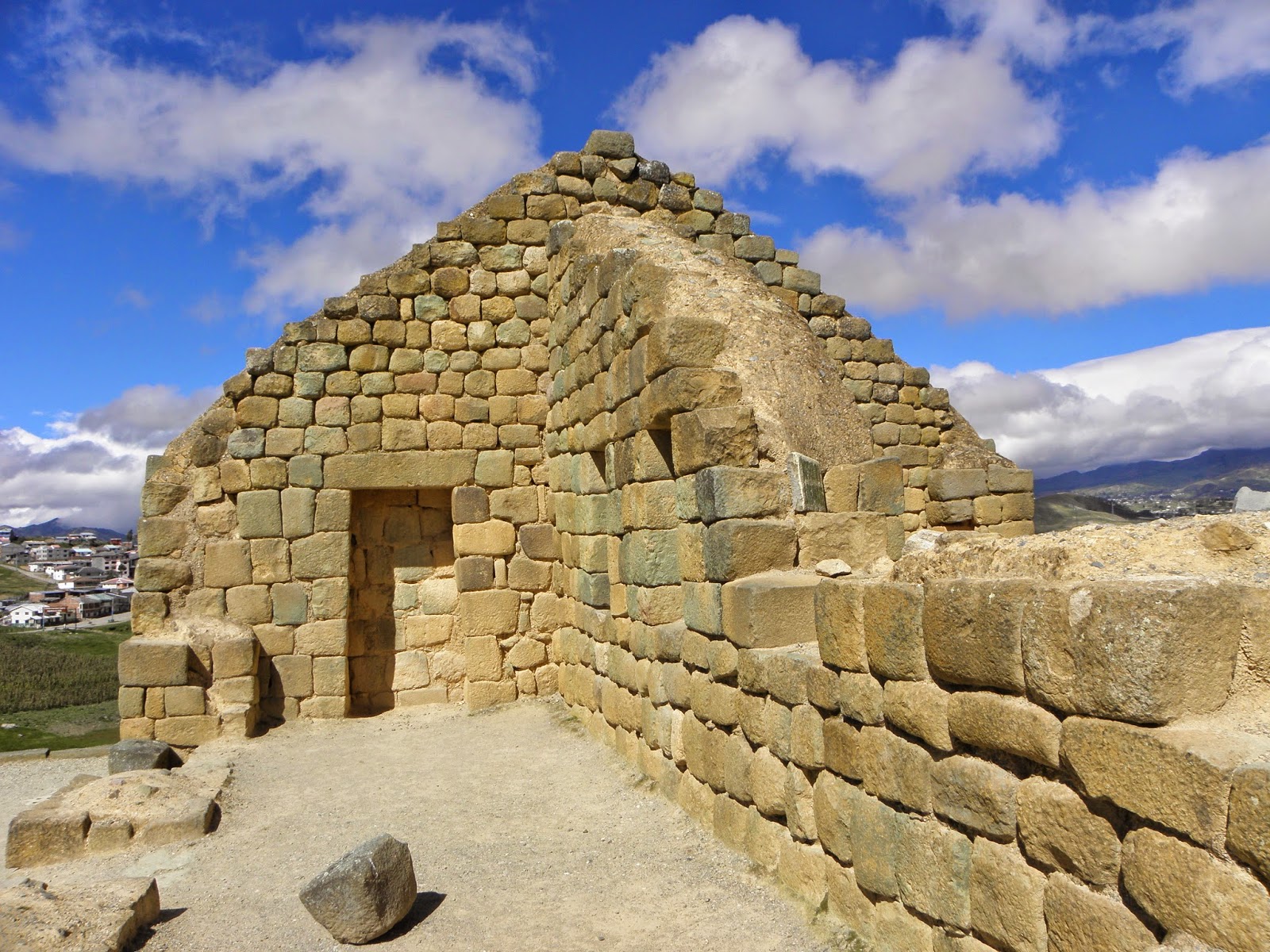 Most of this chamber has fallen down.

A fragment of Inca road called the Ingañan leads past bodegas used for food storage to an exterior plaza known as La Condamine, named after the French scientist’s visit in 1748.

These were the nobles’ living quarters, including the acllahuasi—dwellings of ceremonial virgins where skeletons have been found.

To the right of the temple there are ruins of the more sinister side of Inca culture:

A V-shaped rock was supposedly used for human and animal sacrifices.

Next to it is a larger stone with 28 holes that was thought to be used as a lunar calendar; the holes caught rainwater that told the date by reflecting the moon’s light differently throughout the month. 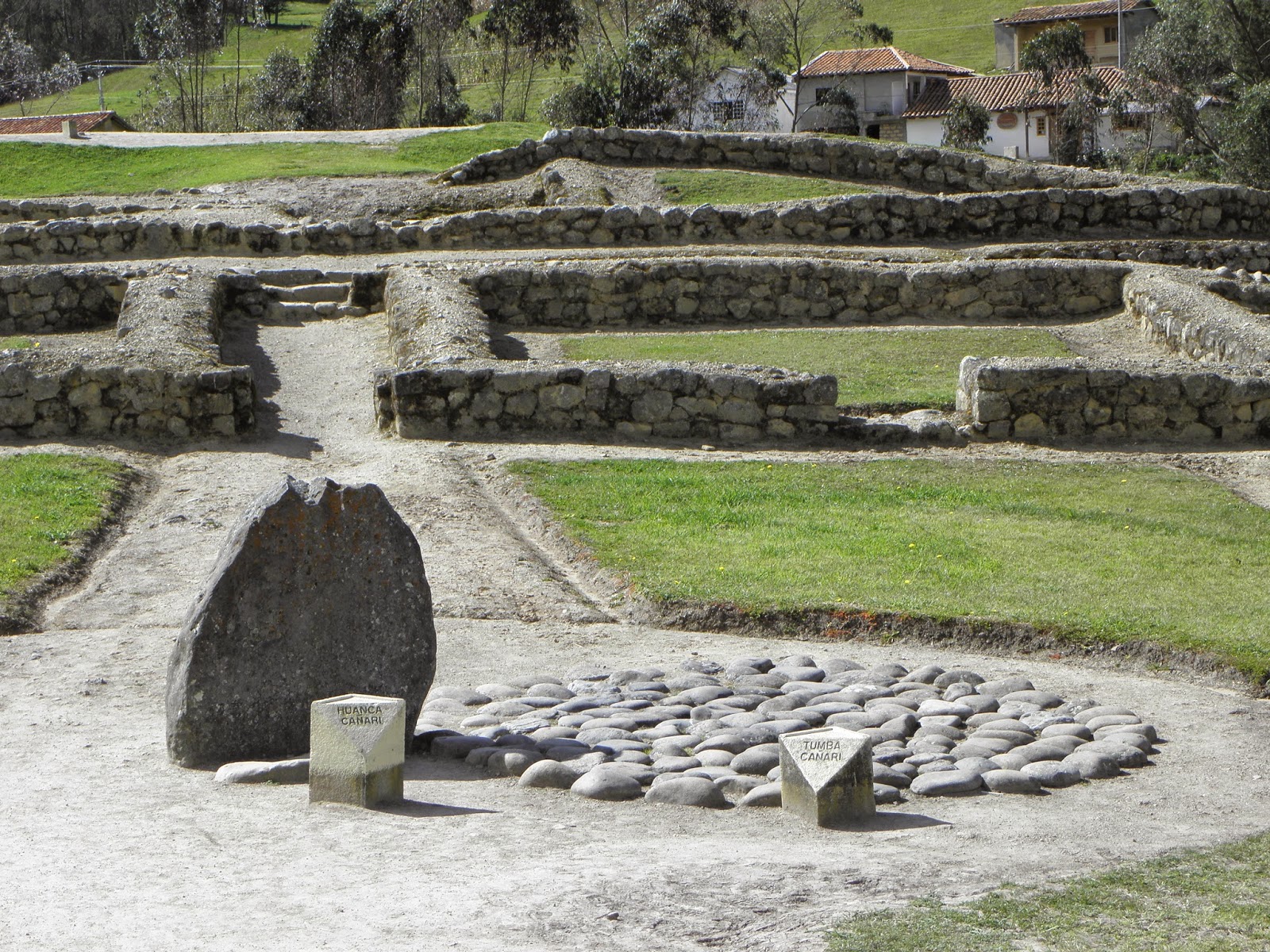 The Incas were not the first inhabitants of Ingapirca.

It had long been settled by the Cañari indigenous people, who called it Hatun Cañar.

The objective of its construction is uncertain.

The complex played an important role on military strategies as a fortress and provisions to troops on route to northern Ecuador.

As the Inca Empire expanded into southern Ecuador, the Inca Túpac Yupanqui encountered the Cañari "Hatun Cañar" tribe and had difficulties in conquering them.

In a second attempt, political strategies lead him to marry the Cañari princess and improve the Cañari city of Guapondelig, calling it Pumapungo (nowadays Cuenca). 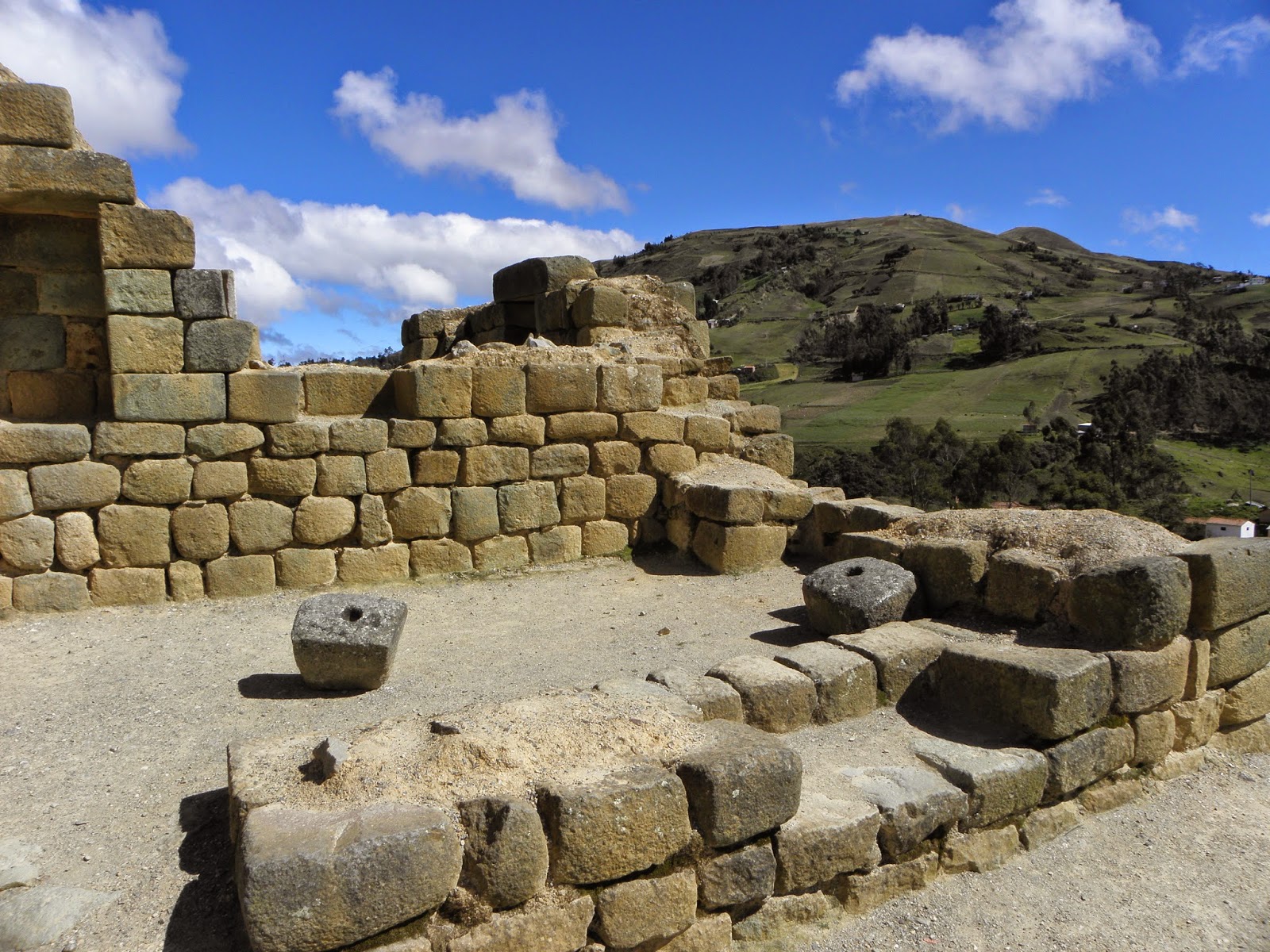 Inca and Cañari decided to settle their differences and live together peacefully, and the astronomical observatory was built under Inca Huayna Capac.

They renamed the city and kept most of their individual customs separate.

Although the Inca were more numerous, they did not demand that the Cañari give up their autonomy.

At Ingapirca they developed a complex underground aqueduct system to provide water to the entire compound.

As a cult edification, people had numerous ritual celebrations on the complex.

Gallons of a local fermented drink were used in these festivals.

As sun and moon worshipers, they tried to be as close to their gods as possible. 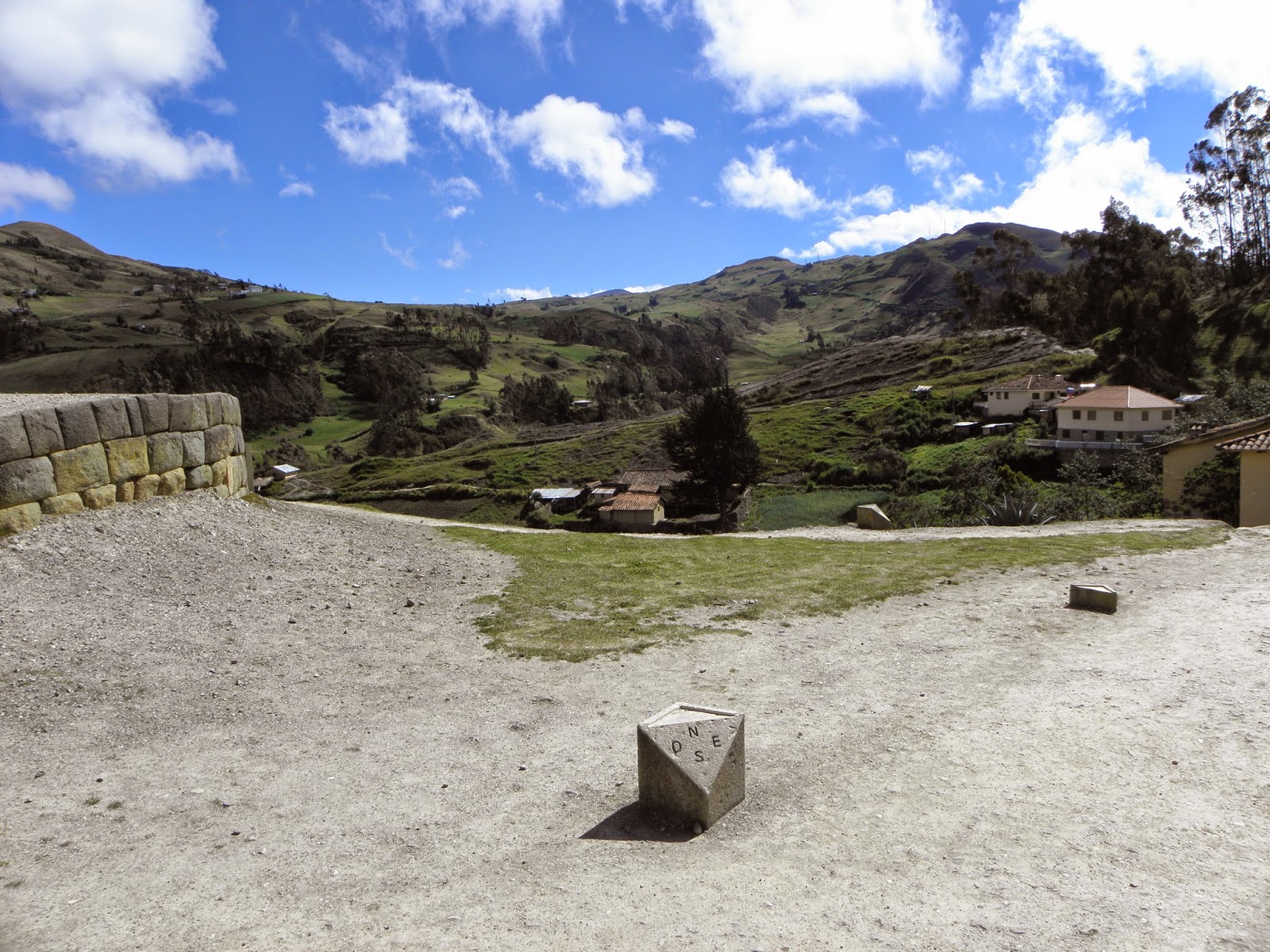 The weather changes there are usually within minutes of each other, calm and sunny one minute and rainy, windy, and cold another minute.

This climate volatility is typical year round.

The people felt strongly that this was the place where the gods had led them, regardless of the climate.

This area, like other areas of Ecuador (provinces of Cañar, Azuay, and Loja), are characterized by a variety of soils, dioritic and porfidic igneous rocks, and volcanic groups.

Ingapirca’s position overlooking the surrounding valley was of key strategic importance, but the city’s growth was short-lived because the Spanish arrived before it was even completed. 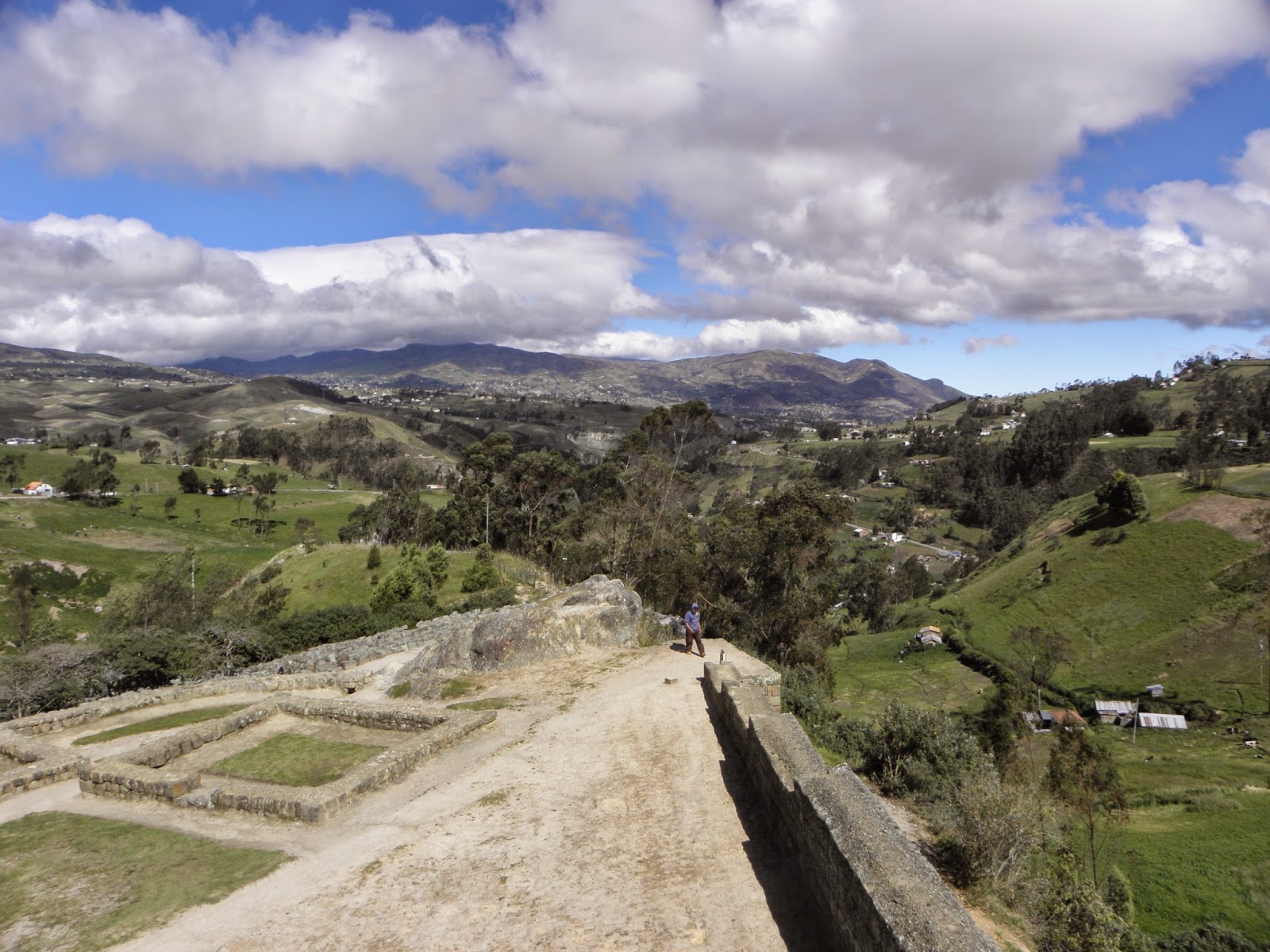 Ingapirca was ransacked and much of the stonework taken by the Spanish to build churches in Cuenca and beyond.

The site lay abandoned until the Ecuadorian government began a restoration process in the mid-20th century, and the site was opened to the public in 1966.

It is now run by a group of local Cañari indígenas (indigenous people).

In times after the Spanish came, Ingapirca was part of a large "hacienda" or piece of land owned by one Spanish/Ecuadorian family.

In fact, people were living atop the Temple platform in a primitive makeshift house.

The ruins were not cared for and decimated when building blocks of stone were needed to construct other buildings for the hacienda.

Ingapirca rose like parish from its province of Cañar May, 1919 after having been managed by its inhabitants under the initiative and direction from Presbítero Don Luis Sarmiento. 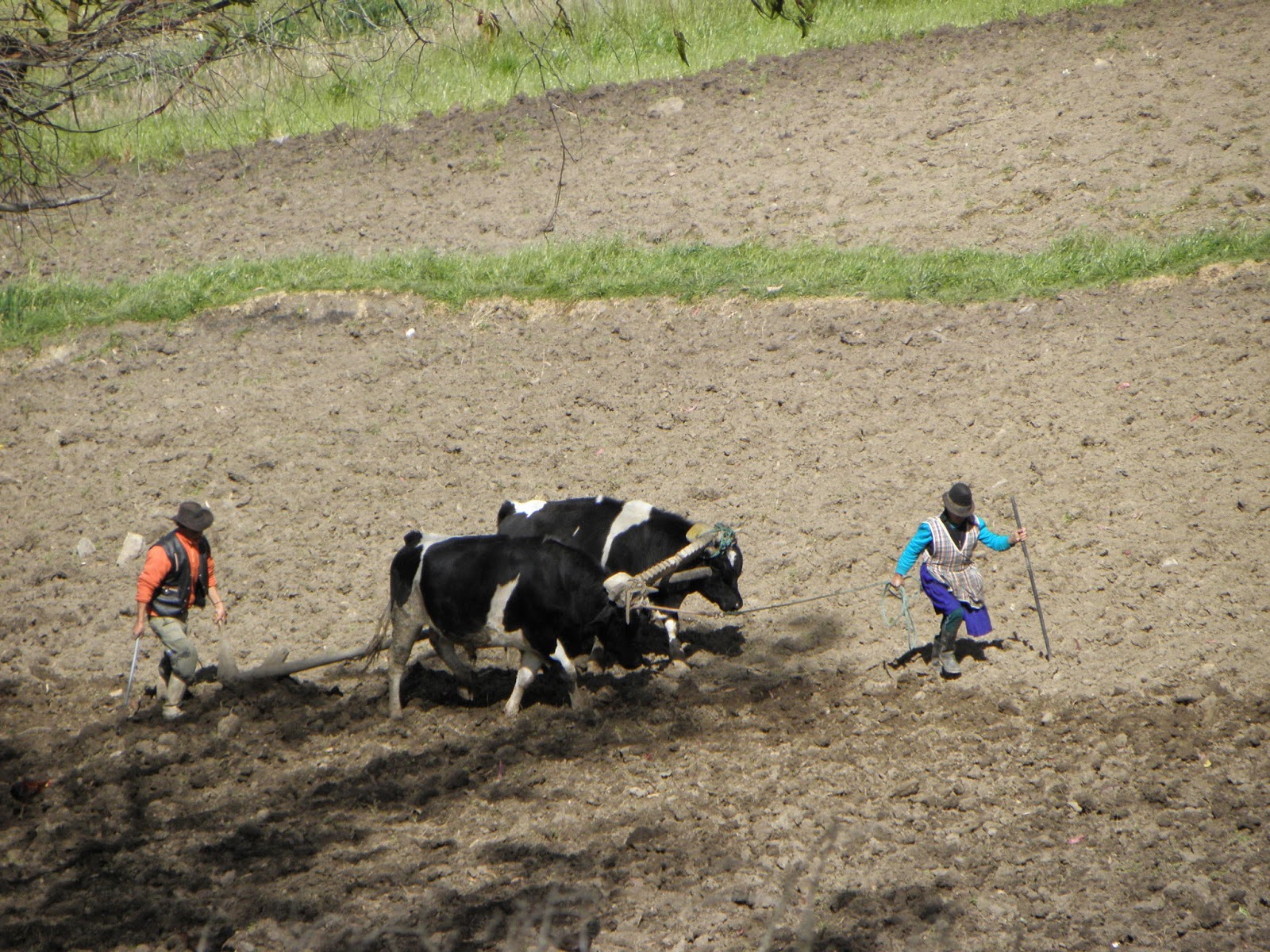 Until then Ingapirca had been just one of many farming communities of the rural parish El Tambo.

The convincing argument that was used for liberating Ingapirca was the administrative necessity to solve the multiple conflicts and confrontations which often were provoked between landowners and comuneros which coexisted in that extensive agricultural and cattle area.

Today Ingapirca continues being one of the more flourishing areas and it surpasses most areas in productivity.

The Archeological Museum at the site has a magnificent model of the Ingapirca Ruins on display.

This makes it easier for the visitor to understand the outlay of the site and see the different viewpoints of the complex.

There are a wide variety of artifacts that were found at the site on display, including beautifully crafted jewelry, handmade textiles and different ceramic items. 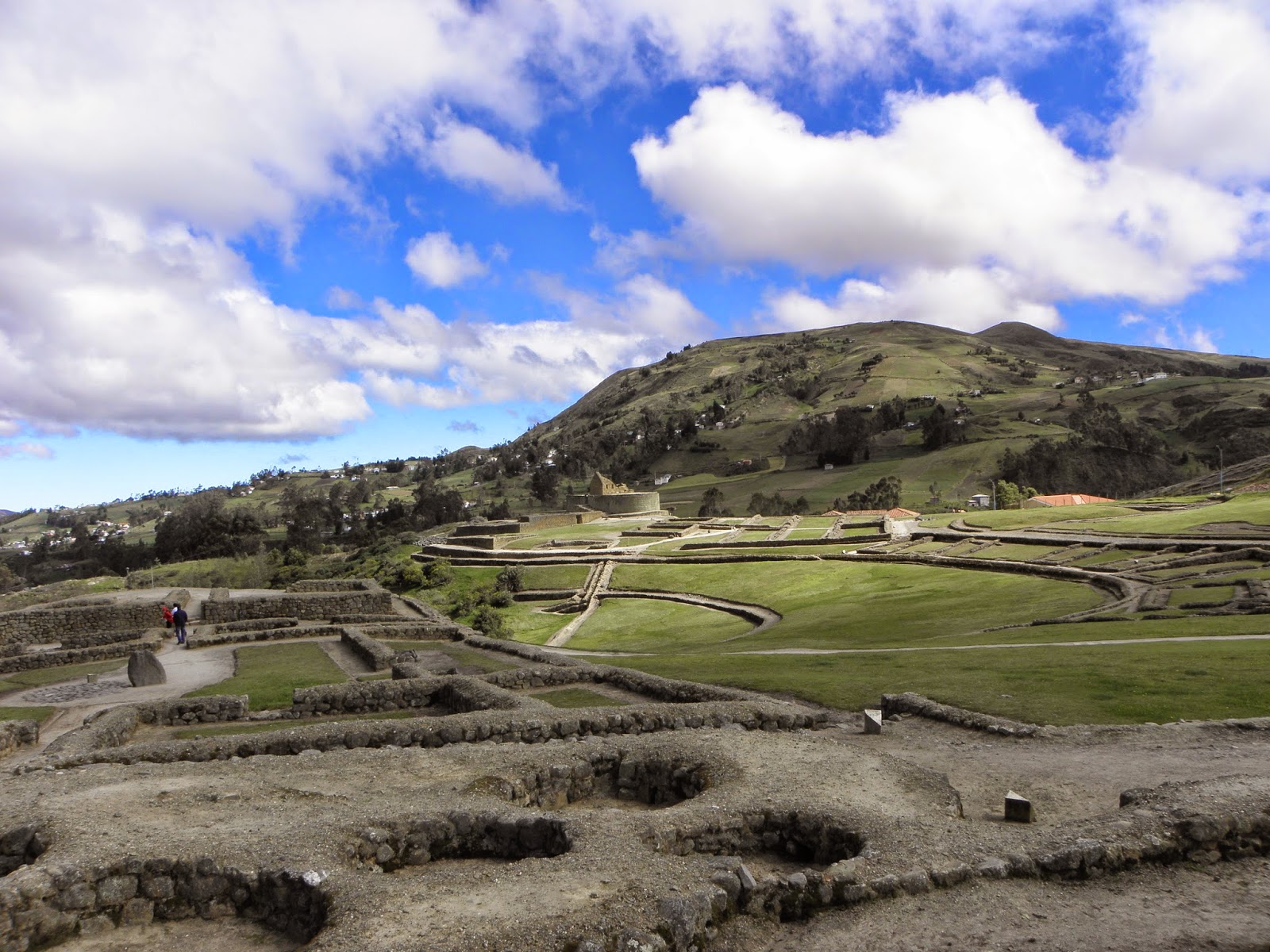 Evidence of both the Inca and Cañari cultures is visible on the site and it is therefore a historically important attraction in Ecuador, as it is the legacy of Ecuador’s pre-Hispanic era.

Nowadays, Inti Raymi celebrations and ritual ceremonies are re-enacted at Ingapirca each year in the third week of June, making that the best time to visit the complex.
Lähettänyt Kiittäkää Aina ja Kaikesta klo 9:42 PM