At first, when I came to Ecuador, I lived in a town called Ibarra.

According to the local knowledge it is so beautiful that your heart stays there and you always come back because you can’t stay away.

For me it is very true.

Ibarra is my home in Ecuador.

I haven’t lived there for years, and I only lived four years in that town.

But it is where I was born to Ecuador.

The northern Ecuador, close to Colombian border, has its own culture and cuisine.

There is very much Kichwa influence but Northern Kichwas are very different from Southern Kichwas who live close to Peruvian border and can even understand their Quechua.

In the North spirit of Karanki, or Caranqui en Spanish, lives on.

There is such a strong influence in the culture, we still remember Pacha, who married the Inca and united Northern Ecuadorian indigenous tribes with Incas.

And who later on became the mother of Atahualpa.

We could not be overcome by the Incas.

Close to Ibarra there is a lake called Yawar kucha, lake of blood or Yaguarcocha in Spanish, because it was tinted in blood when Incan and Karanki warriors fought for the land.

Ibarra, and Imbabura, the province, are place of agriculture, millennial cultures and artisans.
Otavalo, known around the world to tourists, is in Imbabura with its huge artisan market that sells products from the villages all around Imbabura.

There is also Kutakachi, or Cotacachi in Spanish, famous among retired ex-pats because of its climate, and artisan leather products.

And right next to Ibarra, there is San Antonio de Ibarra, village full of sculptors who work beautiful statues with wood and stone in the age old Quito school style.

In the mountains around, in the slopes of Taita Imbabura, Volcan Father Imbabura, live the descendants of Karankis, Zuleteños, Angochagueños.

Around them rise and descend of the mountains and hidden valleys, waterfalls and stony peaks.

Amongst the eucalyptus and pine trees rise the chakiñans, hidden footpath, on slopes so steep that sometimes the sheep are torn from the ground by the wind and dropped in the valley below.

Above them the equatorial sun, the clear blue sky, and el condor rey, Andean giant condor.

Here the food of preference is potatoes, papa, and kuy, the guinea-pig, both indigenous to Andes.

One of the dishes I especially fell in love during the years I lived in Ibarra is locro de papa, a potato soup with fresh cheese.

To do a locro de papa you need: 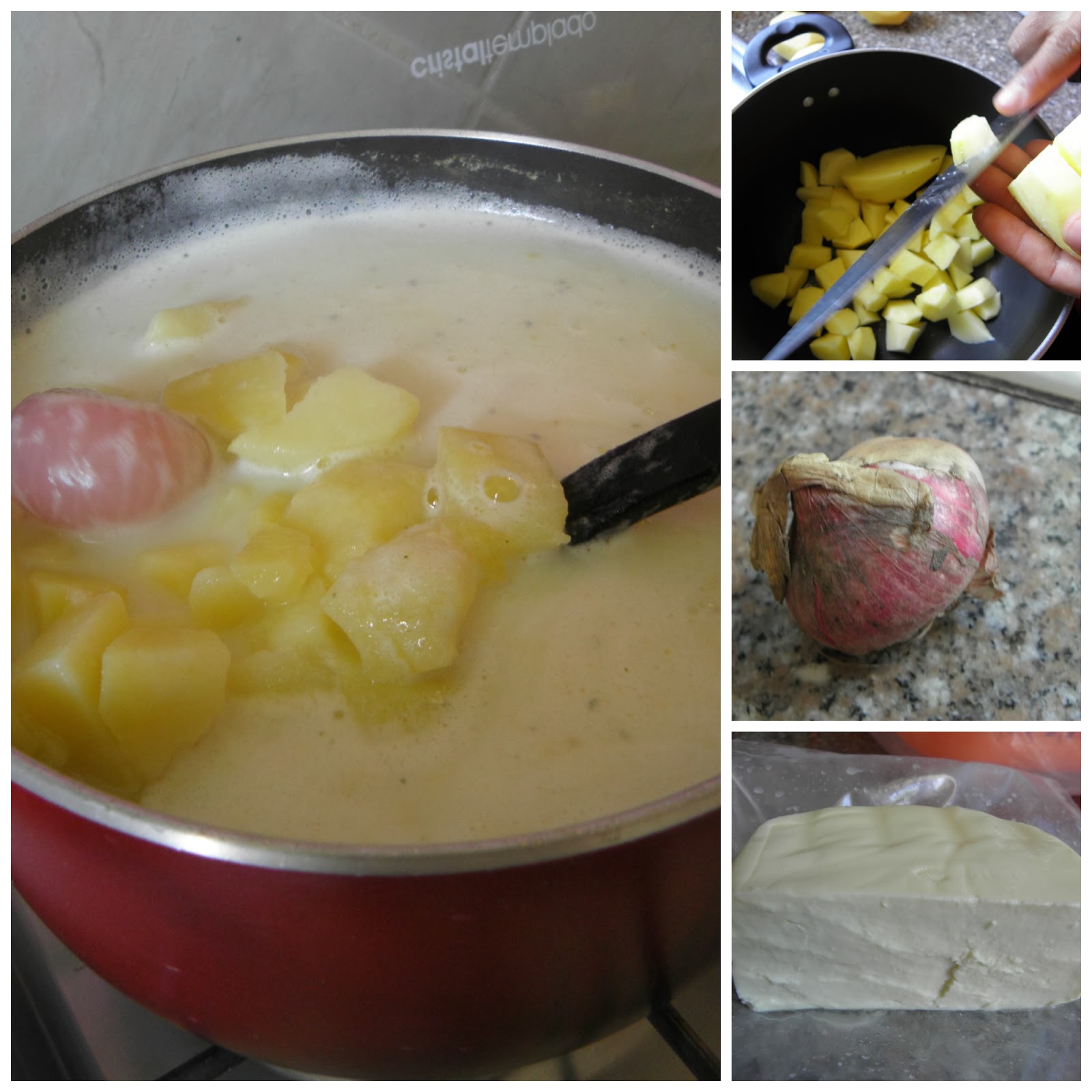 Add water until it barely covers the potatoes.

Boil the potatoes in the water, with salt, pepper and the small onion, until they start to undo and there is no more water.

I put the onion whole because my son doesn’t like to eat onion.

This way I get the taste but there are no onion pieces.

Add the milk when there is no more water.

Cut the cheese in little cubes.

Cut the scallions and add the cheese and scallions in the soup.

Boil until the cheese starts to melt.

Did you like the recepy? Would you like to see another one to make a home remedy for the flu?

Home remedy for the flu