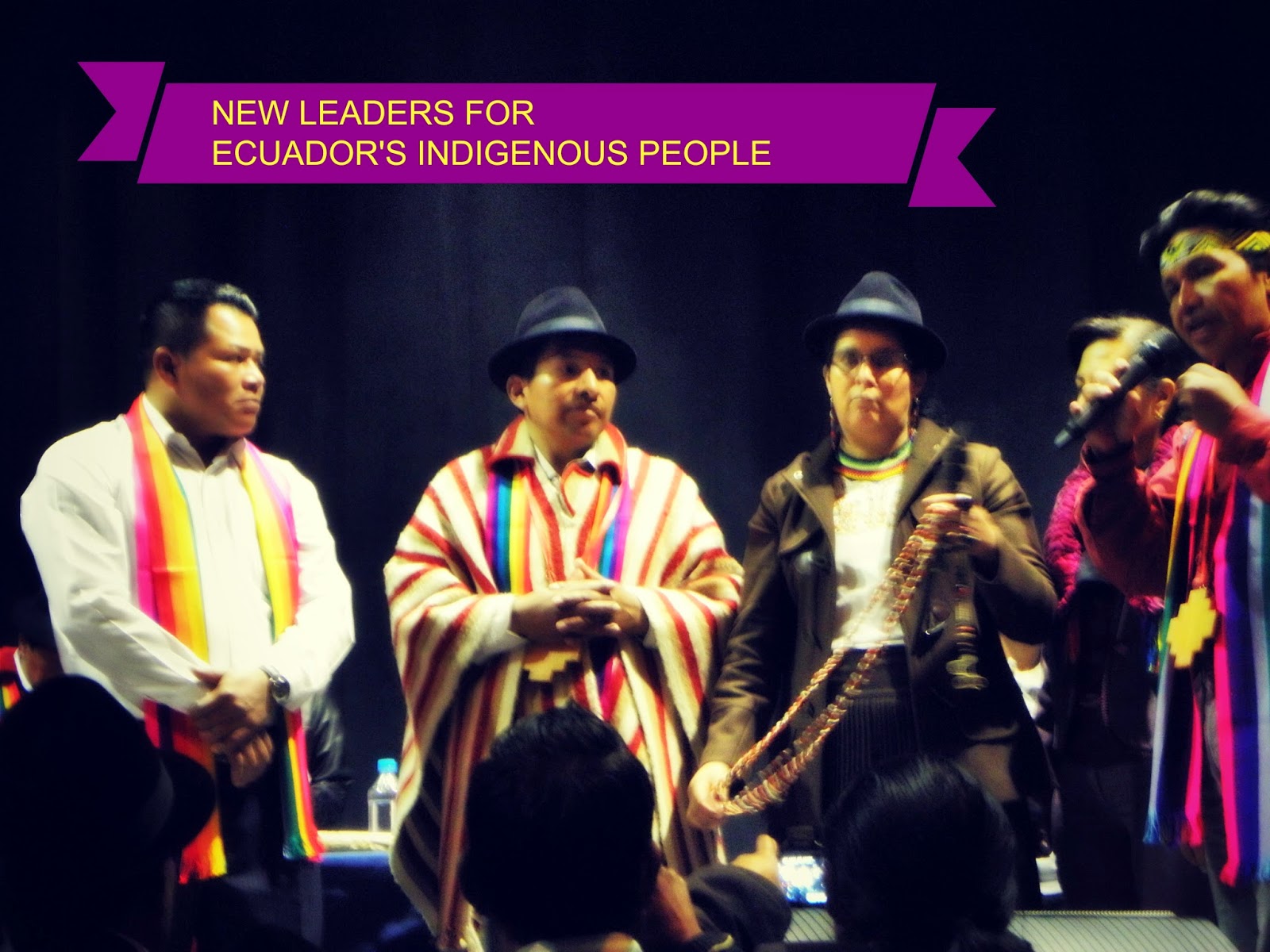 Ecuador’s indigenous people chose their new leaders for the next three years.

Last week’s inauguration ceremony was followed by news, TV, and radio stations around the nation.

A huge difference from earlier times when indigenous nations weren’t considered to play any kind of part in Ecuador.

The ceremony was a mix of modern and ancient.

Filled with cultural expressions that used to be prohibited and followed only in secrecy.

The power changed hands literally when the old president, Humberto Cholango, passed the staff of power to the new president, Jorge Herrera, Kichwa from Cotopaxi.

The new leaders were sworn to their position in front of the sacred fire.

The Confederation of Indigenous Nationalities of Ecuador (CONAIE)

There exists currently a struggle for people's identity, to regain their rights, here, in the continent, and in the world.

The indigenous people of Ecuador do not believe that this struggle should be violent, as that will not take us anywhere.

The principle of identity, which represents the present struggle of the Peoples of the world, is gaining strength internationally.

When speaking identity it does not refer only to the culture of which we are the bearers, but also to the methods of nourishment, way of life, social organization, the way in which we see the world, etc.

This global perspective allows seeing beyond certain political dogmas that have been imposed upon us.

The indigenous movement, with its search for the principles of identity, could serve as a reference point for the rest of Ecuadorian society, since it is a project not only for us but for everyone.

The indigenous problem concerns all Ecuadorians, the government and the governed.

Now that there is no political orientation, the struggle for identity, to know who we are, to recuperate our roots-if indeed we have lost them could provide the way in which we can walk strongly, and firmly into the future.

Since its formation in 1986, CONAIE has led the Indigenous peoples of Ecuador from relative isolation to a position at center stage of Ecuadorian society.

CONAIE is the representative body that guarantees Indigenous people the political voice that has too long been denied them, and that expresses their needs and goals within a rapidly changing world.

In Ecuador, during 170 years of republicanism, it has been wrongly asserted that this is a homogeneous country, made of only one nationality, as the old national Constitution insisted.

That, however, is not the reality.

Many peoples have always lived here, each with its own culture, its own language, its own customs.

Some of these peoples have disappeared, others are in danger of disappearing, and some of us are very much alive.

The indigenous nationalities of Ecuador have always had community and family as the basis of our social organization.

From that base has grown the necessity to form relationships with other communities of the zone, the province and the region.

For that reason they have formed the zonal, provincial and regional organizations.

In order for thier voice to be heard at the national level, they have formed the organization that now represents them, CONAIE, in 1986.

CONAIE represents all of the indigenous nationalities of the country, some organized into provincial organizations, and others not.
The Confederation of Indigenous Nationalities of Ecuador (Spanish: La Confederación de Nacionalidades Indígenas del Ecuador) or more commonly, CONAIE, is Ecuador's largest indigenous organization.

Formed in 1986, CONAIE has pursued social change on behalf of the region's significant native population using a wide range tactics including direct action.

CONAIE is most well known for its organization of popular uprisings ("levantamientos populares") that often include blockading of commercial arteries and the takeover of government buildings.

At the moment of the formation of the organization, indigenous people felt that it had two urgent tasks: land and education.

Along with the resolution of the many land problems that have been waiting for years, the indigenous nations have pushed for the bilingual education program to be organized by CONAIE.

They have succeeded in signing an agreement between CONAIE and the Ministry of Education and Culture that is still functioning today.

In this way they have been able to unify the Kichwa language, and they now want to carry this project further with other indigenous languages.

Within the movement that has been carrying on there has been discussions to define terms such as nationality, Peoples, 'campesinos', Indians, indigenous.

The debates are continuing to clarify these concepts.

These discussions have contributed to a growing sense of self- identification, and of pride in belonging to a people.

This is reflected as well in the understanding of the rest of the nation when they no longer, out of ignorance, use pejorative terms such as aucas when referring the Waorani, jibaros when referring to the Shuar, colorados instead of Tsachilas, or cayapas instead of Chachi.

The word Indian is still used in general, but there will come a time when each nationality will be referred to by its own name. 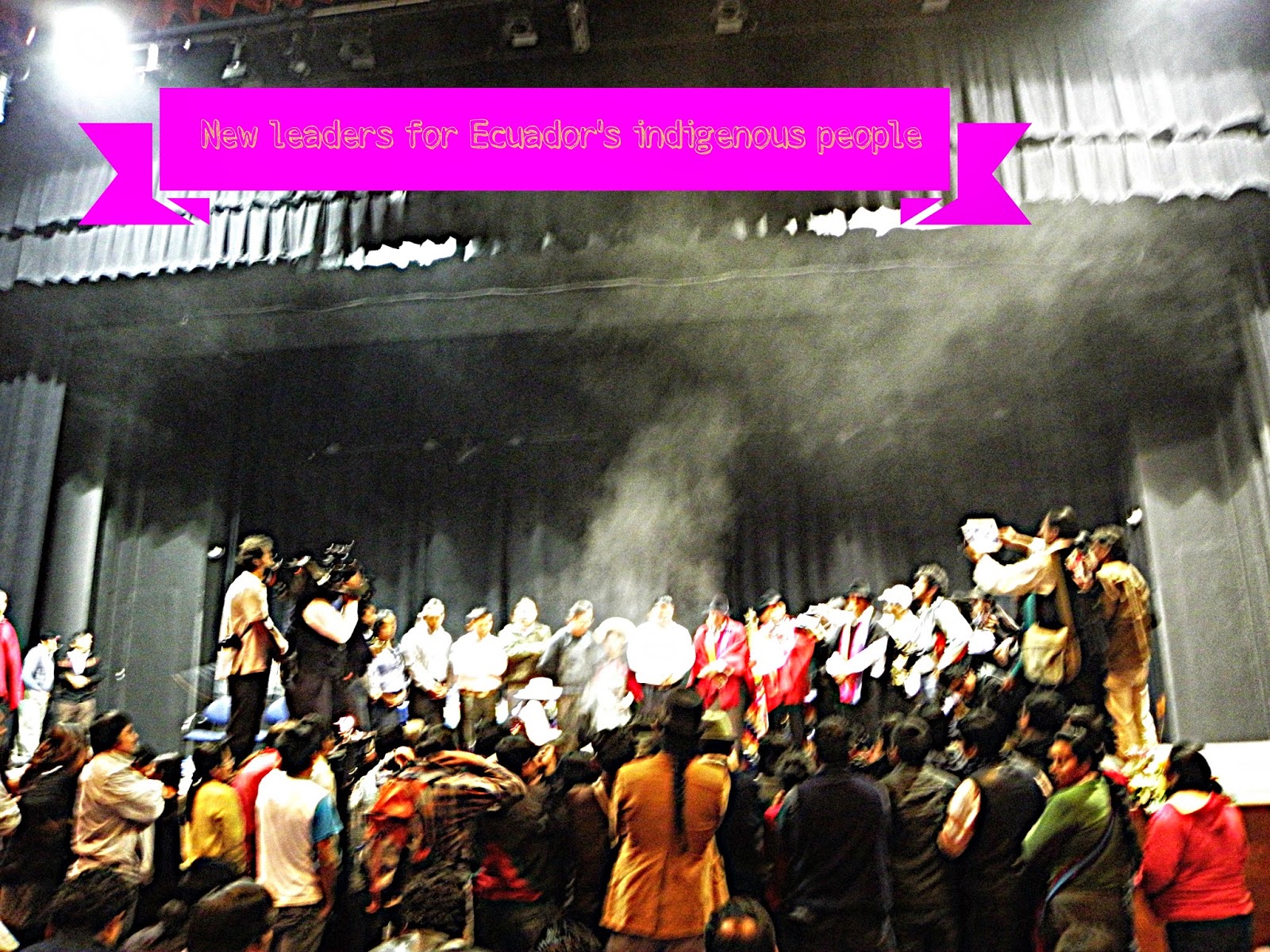